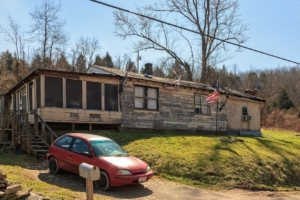 Northwest Ohio is not a wealthy place. It is most often seen as the place people drive through on Interstate 75 on their way north or south through Ohio. The majority of the region was once an area known only as “The Black Swamp” which stretched from Lake Erie all the way to what is now Fort Wayne, In.

After the swamp was drained, the area was devoted to farming and more settlers came; others came because oil had been found in the area. Decades later, more people moved to the region for industrial work.

The industry that once sustained this area is no longer here. As a result, there is widespread poverty which is exacerbated by the lack of resources and goods to sustain the community. Even something as essential as a grocery store can mostly be found either in the larger towns or the handful of cities serving as county seats—a 20-30-minute drive from some towns. People live in these small towns because it is where their family has been for generations and it’s what they know. When some of them move to the bigger cities, they trade in higher rent for a more convenient life.

What about people who simply cannot afford the rent?

Applications for Section 8 housing in Wood County are not open year round. One has to know in advance if they are accepting applications and then there is a long wait before an apartment opens up.

What public housing there is in Northwest Ohio is only available because of funding from the Housing and Urban Development department. The HUD budget in Trump’s proposed 2018 budget is being slashed to the tune of $6.2 billion. It remains to be seen what effect this will have on rural housing but the outlook is grim. Many of the victims of the Trump administration reside in parts of the U.S. that seem to have been forgotten, such as the rural rust belt in Northwest Ohio.

This is why it is crucial for everyone here to band together against Trump and all he stands for. Looking at the conditions in rural areas makes it clear that neither capitalists nor their Democratic and Republic politicians have any true regard for working people in any part of the country. Working people enduring hardships in rural areas should come to the People’s Congress of Resistance in Washington DC September 16 and 17 and represent their communities in the struggle against poverty.