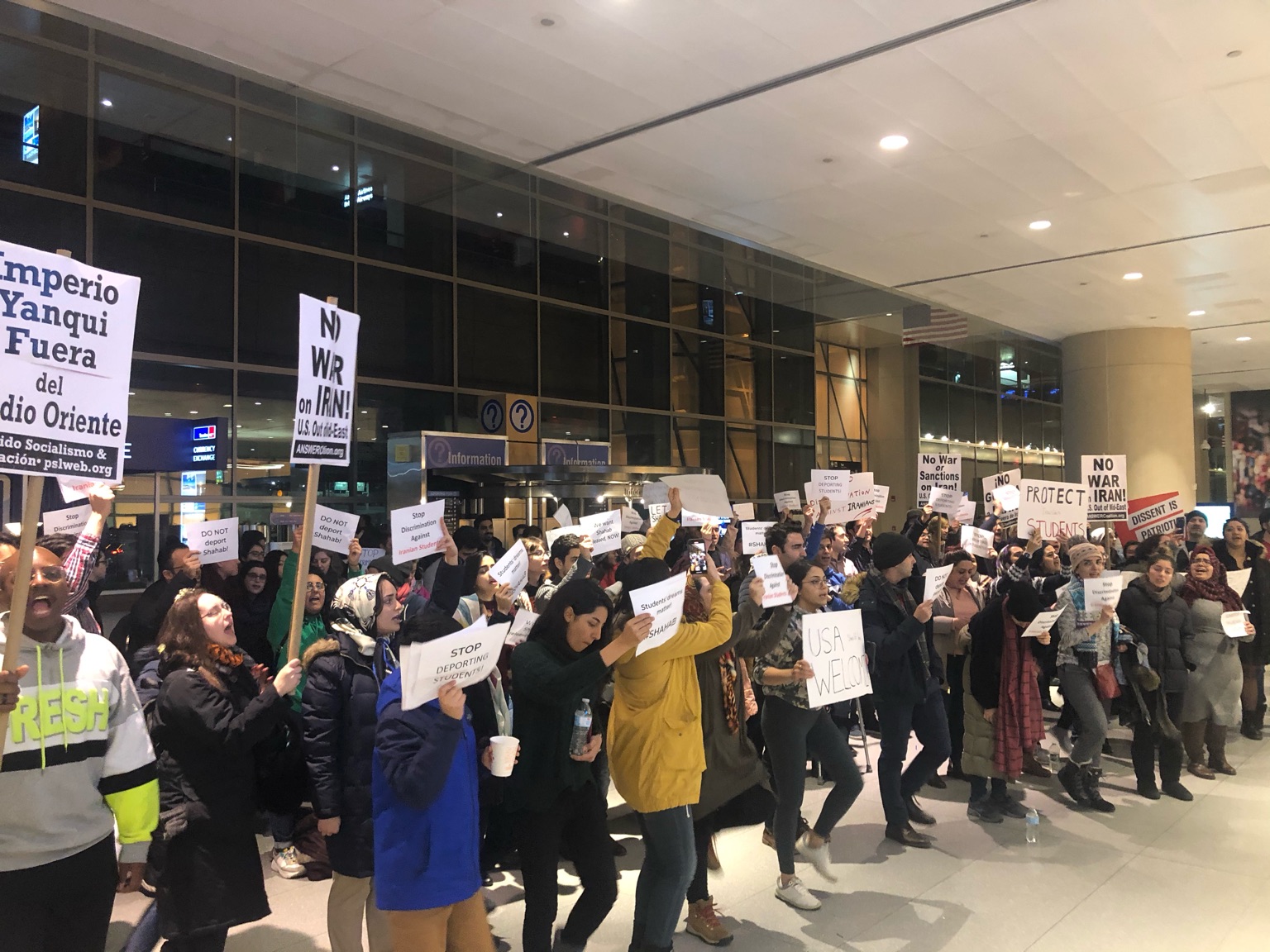 On the evening of January 20, more than one hundred advocates and activists gathered at Boston Logan Airport to demand the release of Iranian student Shahab Dehghani, who was detained by Customs and Border Patrol (CBP) after landing twenty-four hours prior.

Dehghani, a twenty four-year old student studying at Northeastern University, had returned home to Iran last year where he waited 10 months to have his F-1 student visa renewed, according to a fellow student Majid Sabbagh. He was returning to begin his Spring semester when he was detained and held overnight by immigration officials, despite having a valid F-1 student visa. According to officials, his visa was revoked during Dehghani’s arrival interview, with no reasoning as to why.

For hours, the crowd (comprised of fellow Iranian students, community members, and organizers with the ANSWER — Act Now to Stop War and End Racism — Coalition) chanted “stop deporting students!” and “let Shahab in!” One organizer spoke to the significance of the detention happening on Martin Luther King Jr. Day, and led the crowd in chanting “Martin Luther King said ‘Do the right thing!’”

The same evening, Boston immigration lawyer Kerry Doyle filed a federal lawsuit on Dehghani’s behalf to halt the deportation. Doyle argued that his detention and removal after being granted a student visa violates his due process and equal protection rights. Doyle, along with immigration lawyer Susan Church, managed to obtain a 48 hour stay of deportation, which should have guaranteed a halt in Dehghani’s deportation proceeding until his federal hearing the morning after (Tuesday January 21).

In defiance of the court-ordered stay of deportation, CBP officials deported Dehghani just hours after protests dispersed with no communication to his legal team and ahead of his federal hearing.

Dehghani’s case is only one of the many stories of students being held and deported from Boston Logan Airport in recent months. Northeastern University graduate student Mehdi Nasrollahpour stated that he knows more than twenty people who have been deported from Logan Airport, one of whom was his roommate only six months ago.

“As an F1 visa holder and former international student at Northeastern University, I feel outraged by the lack of support Northeastern has provided for this student. They have remained silent about this, leaving many international students, like myself, deeply scared and worried about our safety in the U.S. I fear traveling back home because with the current political climate there has been an increase in international students being detained and denied entry with an outrageous level of surveillance at the hands of U.S. Customs and Border Protection. Students with valid F1 visas are also having their phones and computers checked by immigration officers with no explanation.”

In the face of escalating U.S. aggression toward Iran, particularly following Donald Trump’s recent assassination of Iranian General Qasem Soleimani in Iraq, Iranians in the United States are being targeted as part of the racist fear-mongering that precedes every U.S. war. Dehghani is the eighth Iranian student to be deported from Boston Logan Airport alone.

Zahra, an Iranian UMass Boston graduate student and attendee of the demonstration, wants people to understand that “We are people, like you guys. [War] is not good for all of us as people.”