PSL statement: We condemn military coup; US hands off Bolivia 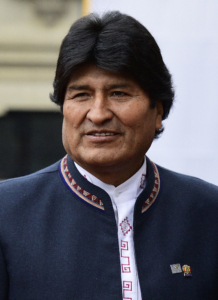 The Party for Socialism and Liberation strongly condemns the military coup in Bolivia, and extends our solidarity to the Bolivian people who are struggling to defend the massive gains won under the leadership of President Evo Morales in the face of this counter-revolution. U.S. imperialism is clearly the sponsor of the coup and we are outraged at this crime against Bolivian sovereignty and democracy.

The goal of the coup is to restore the absolute authority of the Bolivian elites who rule as clients of the United States. They despise the country’s Indigenous majority and want to eviscerate the rights of the working class.

The coup also has a clear regional significance. Progressive and revolutionary forces have been on the march over the past year. President López Obrador’s new government in Mexico committed itself to non-interference in the sovereign affairs of the nations of Latin America. Venezuela defeated the U.S.-backed coup attempt of Juan Guaidó. An uprising in Ecuador forced the government to flee the capital city and cancel an IMF-imposed austerity package. An ongoing rebellion in Chile has brought historic crowds into the streets and put the right wing government of Sebastian Piñera on the defensive despite vicious repression by the police and military. The right wing government in Argentina was voted out of office in favor of the progressive Alberto Fernández-Cristina Fernández presidential ticket. And immediately preceding the Bolivian coup, wrongfully imprisoned ex-President Lula was freed.

The Bolivian ruling class and their military are following the dictates of the U.S. government, which has worked overtime to turn back the leftwing tide sweeping Latin America.

Upon assuming the presidency in 2006, President Morales nationalized the country’s oil and gas wealth. This wealth was used to meet the needs of the people and promote economic development. Morales’ Movement for Socialism (MAS) drew its support from the working class of Bolivia, whose population is majority Indigenous, and transformed Bolivia from one of the poorest countries in the world to the fastest-growing economy in the region. Evo Morales is the first Indigenous President in the history of Bolivia, and his presidency has posed a challenge to the racist ruling elite by empowering the Indigenous majority culturally and economically.

The battle in Bolivia and all of Latin America continues between the forces that want to empower the people and those that want to restore the power and wealth of the elite. People in the United States can play an important role in this intense struggle by pressuring our imperialist government to end its war on the people in Latin America and the Caribbean. U.S. hands off Bolivia!