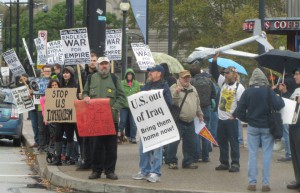 On October 4, Pittsburgh anti-war forces braved bitter cold rain and hail to stand against a new round of wars in the Middle East. Over 50 demonstrators gathered at Schenley Plaza on University of Pittsburgh’s campus for a rally organized by ANSWER Coalition, the Anti-War Committee of the Thomas Merton Center, and many other local peace groups. Protesters connected the wars abroad to the cuts in social services at home by chanting “Money for jobs and education, not for wars and occupation!”

The rally opened up with Taylor Goel from ANSWER exposing the true aims behind the new wars in Iraq and Syria. “Obama, the Pentagon, the CIA, and the bribed and corrupted talking heads in Congress are determined to use the attack against the Islamic State as a pretext to overthrow the Syrian government by military means as their armed gangs could not do the job alone,” Goel told the crowd. “The ultimate objectives of U.S. imperialism are to locate permanent Pentagon military bases in Iraq, Syria and across the entire resource-rich region of the Middle East – the projection of permanent imperial power and domination in a region that contains two-thirds of the world’s oil reserves.”

Julia Johnson, an organizer for the anti-racist group Pittsburgh for Justice, outlined how racism has been a primary instrument for justifying the wars and occupations in the Middle East post-9/11. “After 9/11, especially in our country, we’ve all heard the words that people have said, the hatred they have for Muslim and Arab people,” she said. “It is our duty to step up and say ‘No, we will not allow this racism and hatred!”

Rob Burns told Liberation News his suspicions about the Obama administration’s intentions for bombing Iraq and Syria. “I think it’s profit-driven, absolutely. I am really against making CEO’s even richer off of this type of thing.” Burns said the things we deem terrorism are the same things we are doing abroad with no real justification and no concern for human life.

Deanna Dusold, a protester who held a sign reading “Stop US Imperialism,” said her motivation for demonstrating was that the U.S. has been at war for most of her life. “I’m beginning to realize that unless things change it’s never going to end.”

Raghav Sharma of Pitt Students for Justice in Palestine, also spoke to Liberation News. When asked what he thought Americans could do to stop these wars, he replied “Americans and people around the world are cognizant of the fact that war is wrong in general…. If people become aware of how much power
they truly have, I don’t think this kind of thing can happen.”