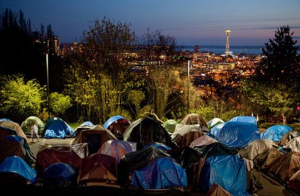 Since our last article published about  month ago on the crisis of homelessness in Seattle, conditions for homeless people in this city have only worsened. Homelessness and the dearth of affordable housing have continued to skyrocket with no relief in sight. As of the One Night Count in 2016, there are 4,505 homeless people living without shelter in Seattle and the city has done nearly nothing to take responsibility for this disaster in a city teeming with tech money and luxurious loft apartments. As of November 2015, the conditions had become so bad that the mayor of Seattle, Ed Murray, declared the homeless epidemic a state of emergency but this has proven to be little more than a ruse to pass the baton of responsibility to the federal government.

On November 2, 2015, the city of Seattle outlined a $5.3 million plan to address the issue while King County outlined instead a $2 million plan. This money is ostensibly going to be added to Seattle’s already staggeringly high annual spending of $40 million dollars to address this issue.

So, with over $40 million being spent, where is it going? What is it being spent on? It couldn’t possibly be being spent on building safe and reliable housing for the homeless and impoverished in the city because the few shelters that exist are filled, the transitional housing programs are full, and there are still thousands of people sleeping outside.

Just in March of this year, a non-profit called SHARE/WHEEL, which are two wings of one organization, stated that they would be closing 15 overnight shelters due to funding shortages and debt, which is due to the complexity of Seattle’s funding of overnight and tent encampment shelters. The closures left 300 people with no safe refuge to sleep as of March 31. Furthermore, when people are made homeless by the city of Seattle, whether due to rent control being illegal in the state or because of the city’s misappropriation of funds to shelters, they ultimately end up becoming the targets of those who serve and protect the wealthiest citizens.

Since Ed Murray has become the mayor of Seattle, he has authorized more police attacks on homeless people who are simply seeking safety and security than any other mayor in the history of Seattle. This totals 527 individual events where police were encouraged to confiscate, harass, and usually destroy homeless people’s tents by breaking poles or slashing the tarps.  Liberation spoke to a woman who described a situation in which she was only trying to sleep under an overpass and she was kicked awake by Seattle police who yelled at her and told her to move somewhere else.

But where was she to go? Where are the other thousands of homeless people in Seattle to go? This has become so common in this city that one representative from the city of Seattle stated that as soon as one homeless tent encampment is “swept,” another one pops up. Clearly what this means is that all police sweeps do is force-migrate the homeless in Seattle in a never-ending game of cat and mouse to make their lives more hellish. Meanwhile, the system refuses to seek real sustainable solutions like affordable housing and legalizing rent control.

Meanwhile, the Washington State Department of Transportation has declared it is willing to spend $1 million on a prison-style three-tiered wire fence to keep homeless people from tenting in The Jungle, an area under the Interstate in South Seattle where some 400 houseless people try to survive. Simultaneously, WSDOT has stated that none of that money will be allocated to feed, shelter or offer services to the homeless. The agency has stated it will depend on the city of Seattle to do this, which in turn is depending on the federal government to take responsibility.

What the federal government, the city and its departments demonstrate is that they do not have the interests of the working class in mind in any way. Seattle, a so-called progressive city filled with technology giants and task forces for lofty causes, is a city of the rich for the rich. Conditions for the homeless in Seattle are mirrored in cities across the U.S. Working-class people, our friends, families, and loved ones are at risk. Whether it is the threat of eviction due to astronomically high rent or the gun of the police officer once we are forced from our homes and onto the streets, we are just one or two paychecks away from these situations. The capitalist system and its government have proven unable and unwilling to address this crisis. We must end the inequalities manufactured by capitalist society and build a society based on meeting people’s needs.