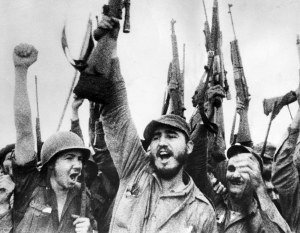 “Landlords can call the police to evict tenants who have not paid the rent. The tenants can lose their homes and be put on the street. Tenants can never call the police and insist that they arrest the landlord because of rent gouging or failure to make repairs. Nor can homeless people simply go and live in empty homes. Why not? Because the police will be called out to defend the banks’ rights of property.”

The above quote from the new volume Revolution Manifesto: Understanding Marx and Lenin’s Theory of Revolution by the Party for Socialism and Liberation shows that the character of the state is an everyday reality for poor and working people.

Today’s revolutionaries, likewise, are always coming up against the state. Whether it is brutal murders by the police, the injustices perpetrated every day in the legal and prison system, or the military interventions around the globe, the state often presents itself as the main enemy in the people’s struggles.
Can anything be done to change this reality? Is this just the way it is and always will be?

Revolution Manifesto answers the question of why the capitalist government and its enforcers are set up against the people, and why, in order to win radical change, we need a revolution that builds a new state on new foundations.

Revolution Manifesto revisits the theories of the state first developed by Marx, Engels and especially Lenin in his groundbreaking work “The State and Revolution,” which followed the explicitly stated “primary objective” of rescuing “Marxism from its devolution into a doctrine of reform, to restore Marxism as a doctrine of revolution.”

In particular Lenin, revisiting Marx, highlights the requirement that revolutionaries cannot simply “lay hold” of the existing capitalist state that aims at repressing the popular classes. They must create a new state dedicated to revolutionary aims. Lenin, again following Marx, uses the example of the Paris Commune—the first place workers ever took power for themselves—to show the viability and possibilities of a true people’s government.

Nearly a century later, Lenin’s analysis on the class nature of the state, and the need to overthrow it, has been proven true time and again.

Examining the historical experience of revolutions in France, Russia and Cuba, as well as pre-colonial indigenous societies, the book asks: do we even need a state? What are the possibilities for revolutionary states to “wither away” completely?

As struggles against exploitation and oppression continue to heat up, this book is a must-read for all those dedicated to understanding and resolving the serious injustices facing our world.