Rich getting richer, everyone else getting poorer

A new paper by two economics professors shows once again how inequality has grown in the United States. According to their study, the bottom 90 percent of U.S. households are poorer today than they were in 1987. Moreover, the bottom 99 percent have seen their wealth share fall substantially since 1980, as indicated in the chart above. 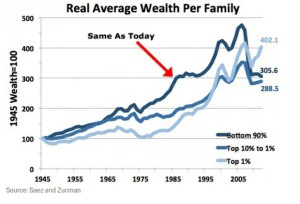 The data on real average wealth per family are indexed to 100 in 1945, so that the current numbers represent the gains in average wealth since that time, as calculated by Saez and Zucman.

On the other hand, the top 0.01 percent’s piece of the wealth pie has increased by 8.6 percentage points in the same period, while the next 0.09 percent’s share has risen by 5.4 percentage points. The authors calculate that as a result of these trends the top 1 percent now own over 41 percent of all the wealth in the country, the most since 1939.

Professor Emmanuel Saez, University of Calif., Berkeley, and Assistant Professor Gabriel Zucman, London School of Economics, base their study mainly on income tax returns combined with government “Flow of Funds” data. This enables them to account for assets that do not generate taxable income as well as adjust for the inevitable “tax avoidance” schemes, both legal and illegal, used by the rich to minimize their tax liabilities.

Wealth is defined by Saez and Zucman as the estimated market value of financial and other major assets (stocks, bonds, real estate and so forth) but excluding consumer durables (cars, TVs and so forth) and unfunded pension plans and Social Security benefits. While this is not the way Marxists define wealth—as collections of use values—the authors’ approach does provide a rough estimate of the huge and increasing disparities in wealth that have arisen as monopoly capitalism, and finance capital in particular, has become ever more dominant.

The domination of giant corporations and banks, over both the economy and politics, has accelerated since the competition in providing social welfare to working people ended with the fall of the Soviet Union and socialist camp in 1989-1991. Since that time, the ruling class through both their main political parties have succeeded in rolling back substantial gains of U.S. workers previously won, which accounts for a part of the rise in wealth disparities. 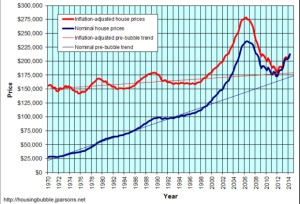 Disparities of wealth accelerated even more as a result of the Great Recession of 2008-2009 and its aftermath. The stock and bond markets have since recovered to new record highs, disproportionately boosting the wealth of the 1 percent, but housing prices remain on average depressed, disproportionately affecting the 99 percent. As a result of foreclosures and evictions, homeownership dropped from more than 69 percent in 2005 to just over 65 percent in 2013.

In addition, most new jobs in the sluggish post-recession recovery offer reduced pay (compared to the jobs lost) and are often part time with few if any benefits. The numbers of long-term unemployed remains elevated, and many have given up looking for work. The large “surplus population” of the permanently unemployed is thereby augmented.

These trends, along with the rising student loan debt, explain why the bottom 90 percent have actually continued to lose net worth the past few years.

Judging from recent gyrations of the stock market, investors are increasingly nervous about the durability and strength of the current upturn and capitalism’s prospects in general, as well they should. Academics like Saez and Zucman are in effect warning the ruling class that inequality has grown to a dangerous level and that measures should be taken to reverse the trend. Whether their warnings are heeded or not, this profit-driven system is doomed in the long run, and we need to build a working-class movement to replace it.