On April 10, a man was arrested by the FBI. He had been recorded discussing plans to travel with other armed people to burn down a religious institution and 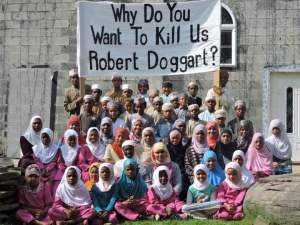 gun down anyone who tried to stop them. His plan was nothing short of “Holy War”: “We will offer those lives as collateral to prove our commitment to our God” and “We shall be Warriors who will inflict horrible numbers of casualties” were two of the things he had written.

Two weeks after his arrest, he pleaded guilty to “interstate communication of threats,” a charge that carries a sentence of between 0 and 5 years in prison, along with a fine. He was not charged with terrorism, or even with a hate crime. He wasn’t even charged with “conspiracy” despite having talked to numerous individuals around the country to plan his attack. And despite his murderous threats and the fact the he is armed, he is currently out on bail, awaiting sentencing.

To this day, the name of this man – Robert Doggart – has not appeared in the New York Times, the Washington Post, nor been heard on CNN or any other national media, despite the fact that just last year he was a Congressional candidate who received six percent of the vote. Nor, in the literal handful of local news articles which have appeared about the case, has he been referred to as a terrorist.

Robert Doggart, you see, isn’t a Muslim, but an Islamophobe, and the religious institution he planned to burn down was a mosque. The community he planned to attack and “utterly destroy” was called Islamberg, a New York community of the Muslims of America consisting primarily of African-American Muslims. It goes without saying that the coverage of this story, and the treatment Doggart would have received from the legal system, would have been completely different had he been a Muslim targeting a synogogue and a Jewish community.

The U.S. ruling class is heavily invested (psychologically and monetarily!) in spreading the false idea that the American people are under threat from Muslims, threats that require spending trillions of dollars and expending hundreds of thousands of lives (mostly Muslim lives) to counter. Acknowledging the very real threat to American lives – Muslim-American lives – from people right here in the United States, not mention the role that constant propaganda plays in influencing people like Robert Doggart, isn’t in their interest, and once again the “free press” demonstrates its role in shoring up ruling class interests.

More details on the story can be found here.