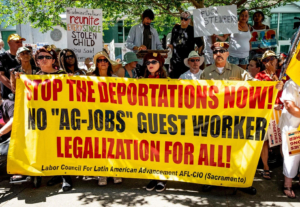 It has been an uphill battle in the struggle for dignity and respect for poor working people migrating into the United States. “Animals,” “drug dealers,” and “rapists,” are all popularized slurs Trump tried to make into synonyms with immigrants from Latin America. In addition to ‘secuestrando’ children into concentration camps and detention facilities, families and their communities are then left without resources to locate their children and cover any processing costs.

On June 6, the Sacramento Board of Supervisors voted to terminate the ICE contract with Sacramento County. It was on the heels of this victory that on June 30 we saw a crowd of over four thousand people come out in solidarity with working families separated at the border. The crowd gathered at the federal building on Capitol Ave. that houses ICE and DHS offices and demanded the local ICE agency comply with releasing all immigrant detainees.

Since then, ICE has retaliated by transferring 78 immigrant detainees held in Sacramento out of state. 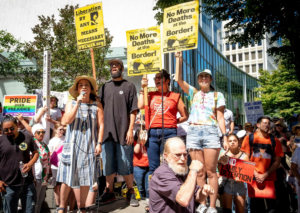 Broad-based coalitions have grown up in response across the country. MoveOn.org, one of the hosting organizations listed on the Keep Families Together website had people signing up to host a rally in every single state across the U.S., with nearly 100 cities in California alone. In Sacramento, organizations including, CIYJA, LCLAA, NorCal Resist, PSL, Indivisible, SAC Kind, CAIR, ACLU, ACT, CA Dreamers, CNA, and Take Back the Night came together to host the “Families Belong Together” rally and march.

The current model of trade and commerce only works for people who own capital, the rich. NAFTA was established in 1994 and it was sold to working people in the United States and Mexico as the best economic path for the future. Almost 25 years later, we can see the destruction and terror of a trade agreement that negotiates for the rights of corporations over those of workers. NAFTA destroyed the Mexican corn industry by subsidizing American companies to grow corn at lower cost, fueling displacement and migration from Mexico. This was yet another opportunity U.S. corporations to profit as companies benefited from undocumented workers’ labor without guaranteeing them any education, healthcare or housing rights. 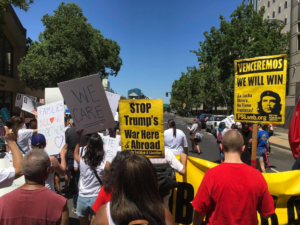 It’s more clear now than ever that there is a class struggle taking place with two sides. There are those of us who believe in social, economic and cultural liberation for all under a planned economy where we respect mother earth and honor the indigenous people’s land. Then there are those who are in opposition, who have all the money and greed and have been using it for a long time to guarantee their position in governing bodies. There is a struggle we must organize for. May we, the working people, grow in unity and power. ¡Hasta la revolución obrera!