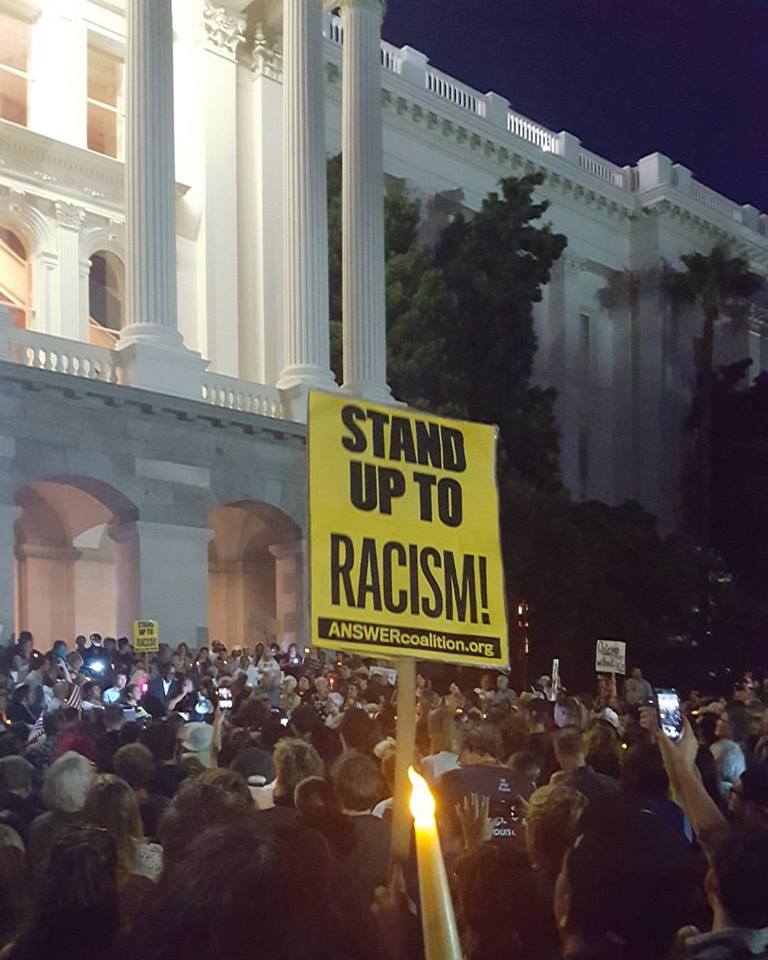 On August 13 in Sacramento activists militantly marched with a clear message of solidarity against the racism and hate that had occured when white supremacists rallied, unabashed, in Charlottesville, Virginia chanting “Blood and soil,” “White lives matter,” “One people, one nation, end immigration” while wielding flames and throwing up Nazi salutes. In Virginia on Aug. 12, anti-fascists took action to shut down white supremacy, letting the community know that fascists were not welcome. It was at this counter demonstration that a car plowed into a group of protesters, murdering anti-racist protester Heather Heyer and severely injuring nineteen people.

Prior to the Sacramento march in solidarity with Charlottesville, a large gathering was held downtown in a sign of mass defiance against the fascists. However, many marchers were angered when it became clear that local Democratic Party politicians and their supporters were using this gathering as a platform to project themselves as leaders of the movement against white supremacy.

There was plenty of reason to protest the presence of several speakers at this event. One was Jim Cooper, the former Sheriff who told the Sacramento Bee newspaper in 2015: “I have busted my butt to put as many people in jail as I could.” His work shows that he actively opposes police body cameras, worked tirelessly to change how California prosecutes police shootings and how they collect data on racial profiling while advocating for the racist motto “Blue Lives Matter.” This is the person who was outrageously chosen by Indivisible Regional Action Network and Follow the Money Coalition to speak out against white supremacy.

Democratic mayor Darell Steinburg was also asked to speak which brought roars of disapproval from parts of the crowd. The first-year mayor has already overseen a campaign of police terror against multiple communities including Oak Park, South Sacramento, and Del Paso Heights. This is in addition to continuing the gentrification set into motion by former mayor Kevin Johnson and proposing a now-scrapped ban on demonstrations within 350 feet of a residential area. The Mayor is no friend to the working people of Sacramento.

Recognizing the wrong here, crowds interrupted spontaneously chanting “Black Lives Matter,” “Silence is Violence,” “No Ban, No Registry, Smash White Supremacy,” “No Trump, No KKK, No Fascist USA,” “No Hate, No Fear, Fascists Aren’t Welcome Here.” Many groups in the crowd including Party for Socialism and Liberation, Democratic Socialists of America, Black Lives Matter, Brown Berets de Califas, and de SacrAztlán, No DAPL Sacramento, Black Women United and others responded with a clear message that we need to recognize we are fighting white supremacy, and we can’t fight white supremacy without challenging the system.

On Sunday evening in Sacramento the people voted with their feet and their voices against racism and fascism by marching in the street and making their voices heard loud and clear. After proposing a silent march from City Hall to the Capitol, many community members rejected such silence and began to chant “Silence is violence” at the front of the march as it began. As the group arrived at the capitol, a die-in was held to honor the lives lost at the hands of white supremacy over the years. As the rest of the march filed past, they could not help but take notice as people continued to chant “No Trump, No KKK, No Fascist USA!”

Following this, the march proceeded onto the west steps of the capitol. Speakers from CAIR, Black Lives Matter Sacramento and the Brown Berets de Sacras captured the attention of the defiant crowd. After being brought up to the stage, the group of community members and community organizations marched off the stage, onto the streets and to the city jail. At the jail, a circle was formed and various community members shared their experiences in dealing with white supremacy.

Marchers against racism and fascism across the country want quality education, social justice, health equity, homes, food, environmental protection – we want justice. It is clear that Nazis want white supremacy. Poor and working class people have more in common with each other, and more to gain by building the widest unity possible, than they will ever have with the capitalist class who send our youth to prison and war to enrich themselves and boost corporate profits.

Neo-Nazis are protected by the police, the courts, and even protected by organizations like the ACLU who legally represented the Nazis in court. By standing up to fascists we are not “just as bad as fascists.”