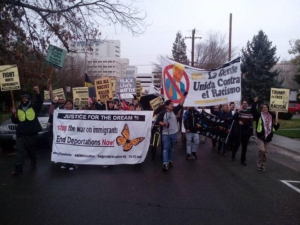 On February 19 in solidarity with cities across the country, a diverse crowd gathered on a rainy day at Sacramento’s McClatchy Park to reject the Trump agenda of racism, bigotry and war.

Before marching through Oak Park, speeches from the sponsoring organizations were heard that included representatives from Jewish Voices for Peace, Sacramento Regional Coalition for Palestinian Human Rights, NoDAPL Davis, Peace and Freedom Party, ANSWER Coalition, and the Party for Socialism and Liberation as well as local members of the community.

“Now here we are with Trump. A continuation of Obama’s deportation programs, a continuation of regime change, and a continuation of a war drive against China, Russia, Iran, and workers, citizen or not, here at home. Trump is the system without its mask or well polished veneer,” said John Hershey speaking on behalf of the Sacramento PSL. 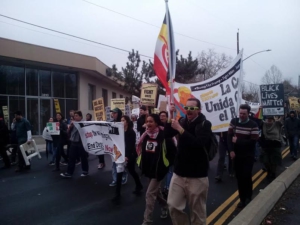 He continued, “We in the Party for Socialism and Liberation stand for socialism, a system that places the needs of people before the enrichment of the few. For a system that recognizes that the labor of all people, from the field hand to the machinist, from the teacher to the engineer, creates the wealth of society.”

Following this, the group began marching up Broadway and to the busy intersection of Broadway and Stockton Boulevard where they stood in the intersection to focus attention on a nearby Chase Bank. Chase and other big banks are at the heart of the capitalist system’s exploitation of working families. They are the motors of the campaign of public looting spearheaded by the Trump administration. A call was made to divest from banks like Chase, Bank of America, and Wells Fargo because of their investments not only in the Dakota Access Pipeline but also in private prisons that include ICE detention centers, and prison slavery against which workers have been striking across the country since September 9.

The march continued down Stockton to the UC Davis Medical Center where the focus was on the attacks on healthcare that Republicans have been leading for decades. It was pointed out that healthcare is a right for all and not a privilege for a few. We can see this in socialist countries like Cuba and Venezuela where public health and not the profit of insurance companies are at the heart of healthcare. The fight continues to ensure the availability of low cost medications, adequate care for all, and fair wages
and union representation for all healthcare workers.

The march then continued to 34th and back up to Broadway. Before returning to the park, the group stopped at the site of newly available high-cost condos and studio apartments. Flanked by overpriced coffeeshops and vegan restaurants, this is the most high profile example of gentrification in Sacramento. Oak Park, once home to the heart of the Black community and a center of Black resistance struggles in previous decades, has seen many of its longtime residents forced to move in recent years.

Once the home of the office of the Black Panther Party that was attacked in a police riot in the late 1960’s, the neighborhood was bought up by developers that included former mayor and resident of Oak Park, Kevin Johnson. The usual promises of beautification and public safety followed while property prices rose and families were forced to move in search of affordable housing. With a new mayor now in place, there are no signs of the advance of gentrification slowing although the community has mounted a resistance against these attacks. The march stood in full solidarity with the struggle for community preservation in Oak Park.

Protesters recognized that this process of destabilization and displacement of working class communities was taking place across the globe as a necessary part of capitalist development. Daisy Aguilar of the PSL put this into perspective saying, “As we continue to protect one another here, it’s also critical to be fully aware of what is happening abroad. We must start to connect the issues that are occurring internationally because as workers of this world, we face a common battle against a world capitalist system that is working together to exploit the people for profit. And though sometimes we may become frustrated and feel hopeless, we have no choice but to put on a fight and commit to a revolution instead of doing nothing at all. Don’t let the movement be intimidated. Don’t let it die out. Because this is just the beginning and we need all of you to join us to tell Trump, his administration and this whole system, that although you attempt to cause divisions amongst us, we are not afraid.”

After one month of struggle against the Trump agenda that has so far included a ban on Muslims, promises to start building a wall, a wave of deportations and several predatory cabinet nominations, it is clear that a movement in the streets will be central to resisting attempts to roll back the social gains made in the past five decades.