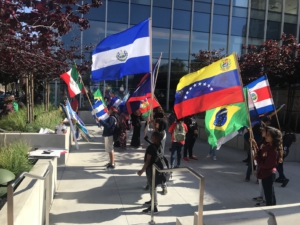 On May 1, the San Diego branch of the Party for Socialism and Liberation participated in the city’s annual May Day March. Hundreds of people in red clothes marched through the streets of downtown San Diego to demonstrate their solidarity with workers everywhere and fight back against company CEOs and anti-union laws which exploit them. But this year the fight was about more than showing up for union workers and encouraging those who haven’t unionized to do so. Due to increasing tensions brought on by the xenophobia and imperialism of the Trump administration, there was a need for organizers to touch upon global struggles, from Palestine to Venezuela and those of immigrants arriving and living in San Diego.

The march began at Comerica bank in downtown San Diego, going in front of the Edward J. Schwartz Federal Building. The march then  converged with the PSL, Democratic Socialists of America San Diego, Union Del Barrio and multiple organizers at the Sempra Energy Building. Before resuming the march, union workers spoke of the criminal ways companies treat workers in order to  prop up their wealth.

Sempra Energy in particular has spent over $200,000 on union busting to deny its workers the right to collective bargaining. Its treatment of its workers mirrors that of businesses all across San Diego, from the Marriott hotels and home care companies, to the healthcare systems and San Diego’s various school districts. Workers from unions such as the United Domestic Workers of America, the International Brotherhood of Electrical Workers and the Union of Healthcare Professionals marched in response to this mistreatment. Notably, the union Unite Here held a months-long strike in San Diego against Marriott, fighting for better wages, work hours and benefits with the slogan, “One Job should be Enough!”

This year’s May Day march theme was “The workers’ struggle has no borders.” Organizers of the event compiled a list of demands to go alongside this theme, including the right to fair and dignified wages for all, as well as an end to family separations, the privatization of public education and the unjust wars the United States orchestrates both domestically and abroad. These demands are especially relevant at a time when undocumented workers are in constant fear of deportation and  people in South and Central America, faced with threats of violence from the imperialist acts of the United States government and at home, are forced to make treacherous journeys across borders.

As a result, many organizations focused on international solidarity attended the march, such as the Palestinian Youth Movement and Trabajadores Organizados, the latter group of which was involved in a protest of ICE some months ago that resulted in multiple arrests. A member of  Palestinian Youth Movement made a statement on a stage in Chicano Park, “The United States is an ultra-capitalist country whose major export is war and violence. This country was founded on Native blood and African enslavement, and with every century it grows its violence in new ways to secure profit and death. Today we have hundreds of thousands of Syrian and Afghani refugees spread across the world due to U.S./Saudi Arabia war economies.” 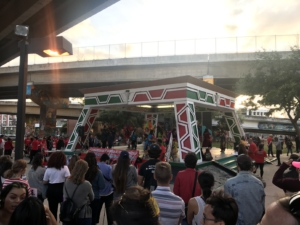 Carrying signs printed with the words “Hands Off Venezuela,” members of the PSL and the ANSWER Coalition (Act Now to Stop War and End Racism) also stressed the need for solidarity with working class Venezuelans. This comes at a time when, just one day before, the U.S. attempted a coup to overthrow the democratically elected government of Nicolas Maduro. The  majority of Venezuelan working people support Maduro for his continuation of the Bolivarian Revolution which has vastly improved their living conditions. At the end of the march, Gloria La Riva, long time member of both the PSL and ANSWER, spoke about the necessity of defending Venezuela and building socialism here in United States: “What they have in Venezuela is a struggle for socialism. Socialism is the worker’s system! […] Tomorrow, if Jeff Bezos didn’t go to work, everything would still run. Tomorrow, if the workers didn’t go to work, nothing would happen.”