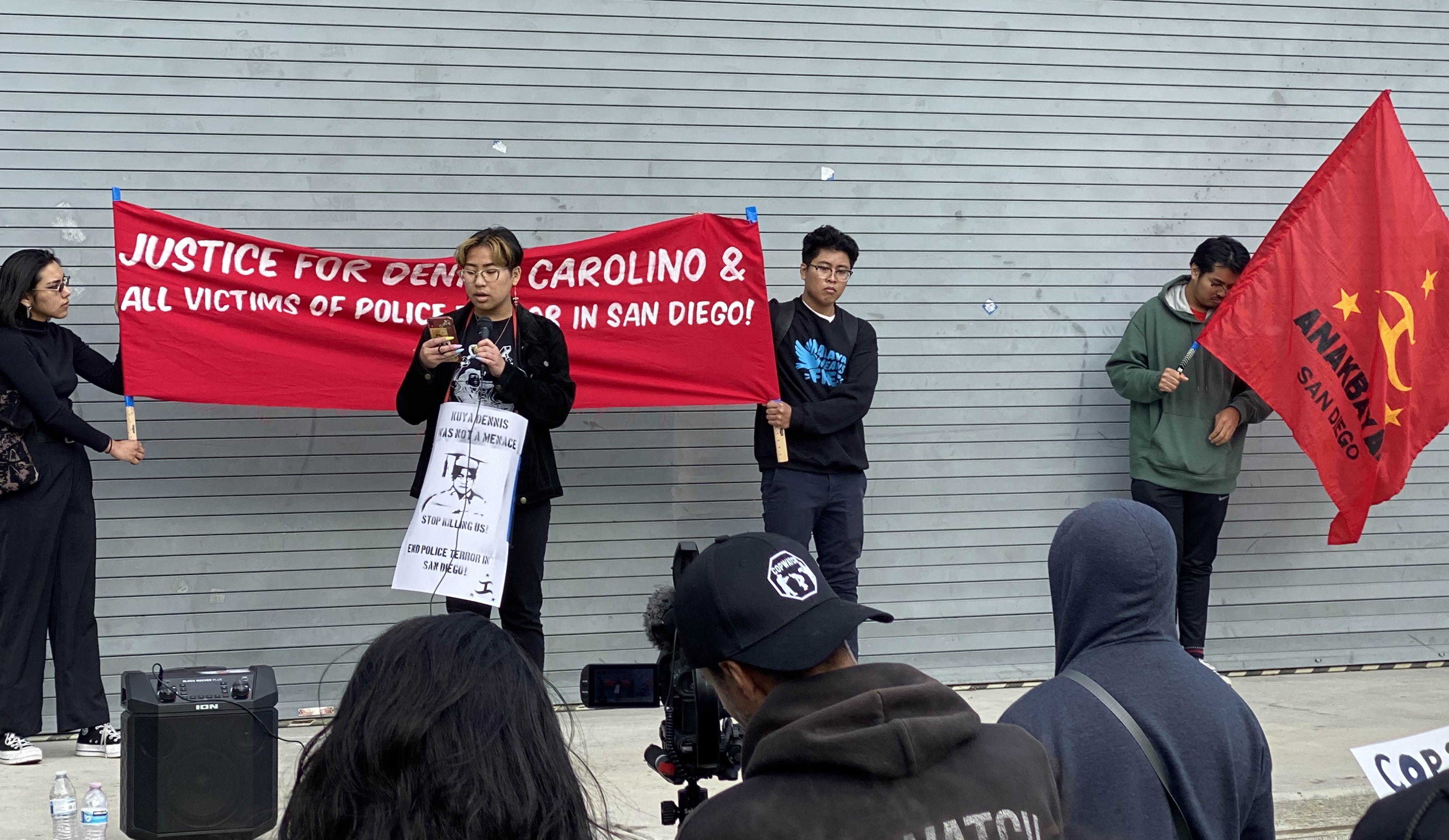 Several dozen people took to the streets on March 7 in City Heights. They gathered to oppose the extrajudicial killings of Dennis Carolino and Toby Diller by San Diego Police officers.

The Carolino family organized the protest in conjunction with Anakbayan and Migrante San Diego. Other organizations in attendance included the Asian Solidarity Collective, Socialist Unity Party, Pillars of the Community, Colectivo Zapatista, Showing Up for Racial Justice, the Party for Socialism and Liberation and more.

The day began with speeches from organizers and activists from around the city. Each stood up to denounce the U.S. police state and the violence produced by it. They also made sure to uplift the experiences and voices of those affected by police violence, specifically the Diller and Carolino families.

Following multiple passionate speakers, the march proceeded through the neighborhood before stopping at the City Heights’ Police Station. There, family members had the opportunity to stand up and confront the police department as officers watched from the rooftop and parking lot.

The procession then meandered through residential areas as organizers handed out informational leaflets and stood up in the face of police intimidation. Squad cars trailed and flanked the march as officers engaged in jeers and laughter in the faces of several attendees.

On Aug. 24, 2019, SDPD responded to a call where a 52-year-old Filipino man, Dennis Carolino, was experiencing a mental health-related episode in his own backyard. His aunt called 911 to ask for help to bring her nephew to a mental health facility.

Despite knowing it was a mental health-related call, the police engaged Carolino without waiting for the Psychiatric Emergency Response Team. The (edited) body cam footage shows an interaction between the officers and Carolino. The interaction ended abruptly when officers used a taser to subdue him, before shooting him seven times. After Carolino fell to the ground, officers quickly handcuffed the man they had just killed.

The case of Toby Diller

Witnesses account that Toby Diller, 31, was drinking a beer outside around 3:30 p.m on Jan. 24. Officers Devion Johnson and Benjamin Downing approached Diller for a stop as he attempted to finish the dregs of his beer. Officers escalated the situation and Diller was tackled to the ground before being shot in the back of the neck. SDPD Lt. Matt Dobbs attempted to justify the use of force by claiming: “Diller was agitated. And resisted arrest.” Even if that were true, how is death a fitting punishment for resisting?

Unsurprisingly, bourgeois media parroted the police narrative. The fact is that Toby Diller was never given due process or tried in a court of law.

After a Community Review Board meeting in regards to the Diller killing, the police announced they are not investigating the case. Oak Park Community Council member Lupe Diaz said conflicting reports about the incident leave many questions about why two San Diego Police Department officers shot and killed an unarmed man in response to a simple violation of drinking alcohol in public.

“I love Toby the most. I never wanted to give up on him. I love Toby very very much,” sister Nikita Diller said. “I’m concerned. I’m grieving. I just miss my brother.”

The epidemic of police brutality

The killings of Toby Diller and Dennis Carolino represent two cases of police brutality, which has consistently been on the rise. There were 1,004 cases of “use of fatal force” by police against civilians in 2019, compared to 992 in 2018.

In a speech, Jose Cortes — who just ran for Congress in CA50 — drew comparisons to the killing of Alfred Olango. Olango was 38 when he was shot and killed by police after they were called for emergency psychiatric aid.

Police violence is not new to San Diego residents, nor is it new to the indigenous Kumeyaay people. Brutality is a physical representation of the exploitation and terrorization of working-class and Native neighborhoods by police. Despite witness testimony in the case of Toby Diller that counters the police account of events, as well as body cam footage in the killing of Dennis Carolino, none of the four officers involved is facing charges for their actions.

No justice, no peace!

The people of San Diego took to the streets to demand justice for Dennis Carolino, Toby Diller, and all victims of police brutality. Given the history of policing in San Diego and the rest of the United States, it is unlikely that the officers involved in the Carolino and Diller cases will be brought to justice.

The family and community have made the following demands:

1. Independent investigation of the shooting of Dennis Carolino and all cases of police brutality in San Diego.
2. Fire and prosecute the two police officers with no pay.
3. Police Training and education on Mental Health.
4. Divest from SDPD and reinvest in Social Services: Mental Health Services.
5. Indemnification for the Carolino Family and all families of victims of police brutality.

The Party for Socialism and Liberation supports these demands and calls for the dismantling of both the racist police state and mass incarceration. All perpetrators of police brutality and violence should be prosecuted. Every political prisoner should be freed. Without a doubt, reparations must be paid to all nations oppressed by U.S. imperialist and colonialist violence. The killings of Dennis Carolino and Toby Diller further demonstrate that there cannot be “liberty and justice for all” under capitalism.