Close to 200 protesters gathered at United Nations Plaza in San Francisco at 2 pm on November 3 to rally and march against the ongoing U.S.
involvement in the Saudi-led war on Yemen. The protest was organized by the Yemeni Alliance Committee and the Yemeni Freedom Council. Many allied organizations and community members were present to speak out against the illegal war which has caused what the UN refers to as the world’s worst humanitarian crisis.

Since March of 2015, the U.S. has been backing the Saudi-led war in Yemen. Currently the U.S. provides mid-air refueling to Saudi Arabia and United Arab Emirates jets that conduct airstrikes in Yemen as well as assistance with bomb targeting and logistical and intelligence support. The bombing campaign supports a blockade that prevents food and medicine from reaching the people of Yemen.

“We have known since before Vietnam that wars are never for the interests of the land’s inhabitants,” explained Jehan Hakim, the Director of the Yemeni Alliance Committee. “Wars drive profits, as we’ve seen in the billions of dollars the U.S. made from the Saudis, to do this war. Silicon Valley has been a long-time partner of the kingdom. Let’s be clear the war in Yemen has not been a civil war since March of 2015. Yemenis are not being saved. Yemenis are being killed by bombs in the tens of thousands, while Secretary of State, Mr. Pompeo, who backed the continued support from Saudi Arabia in the war in Yemen, protecting $2 million dollars in US weapon sales. Now he’s calling for a ceasefire. Saudi attacked two days later. We do not believe that this call will help Yemen substantively.”

The United States sells weapons to Saudi Arabia, and the bombs that strike Yemenis are made in the U.S. The Saudi-led coalition has killed over 50,000 Yemenis and destroyed the country’s infrastructure. Nearly 22 million Yemenis are suffering from food insecurity. A child dies every 10 minutes from preventable diseases as the Saudi blockade restricts humanitarian aid, medical supplies, and clean water from getting into the country.

“A lot of people are completely unaware,” Attorney Beilal Chatila, who has been involved with the Yemeni community for the past two years, told Liberation News. “It’s really important to spread awareness of this because you don’t see it in the mainstream media. It’s really one of the foremost human rights crises taking place right now. We’re not just talking war in the traditional sense. We are talking about complete famine and complete destruction of centuries-old communities within Yemen. The U.S. is a perpetrator in all this. The government is one of the funders of this and the proxy role that we play in the Middle East and geopolitics through Saudi Arabia and Israel needs to be recognized first. We have the power to stop this.”

Many speakers spoke about the contradiction between the supposed U.S. commitment to human rights and the actions of the U.S. government that have helped to bring about the world’s worst humanitarian crisis in decades in Yemen, according to the UN. The U.S. corporate media chooses to ignore the many abuses of the Saudi government as the U.S. government supports Saudi efforts.

ANSWER Coalition (Act Now to Stop War and End Racism) member Daniel Sankey spoke about how crucial U.S. support is to the war on Yemen and how the people can work to end the crisis: “It’s important to understand that Saudi would not be able to engage in this war without the full support of the United States, which sells weaponry and provides political support to them, and the corporate media which is silent against these atrocities. While the Yemeni people fight, we must also fight back with them in our own country. We must talk to our friends, our families, our communities and networks and draw them into this. We must shine a light on these atrocities until it is too humiliating for those who continue to support this: the oil interests, the military interests, the United States that grow extremely wealthy off of this Saudi-backed violence.”

Throughout the action, attendees were asked to contact their senators and representatives in Congress and tell them to support  HConRes138, which would end U.S. support for the Saudi-led war in Yemen and SJRES54, which would end unauthorized U.S. military involvement in Yemen’s war. Both of these measures would help support the people of Yemen in their fight for self-determination and against U.S. and Saudi intervention.

After the rally, many drivers honked their horns in support as the demonstrators marched from UN Plaza to Market Street while chanting, “Yemen can’t wait!” and “U.S. out of Yemen!” 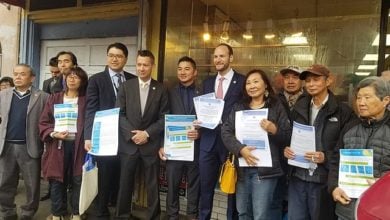 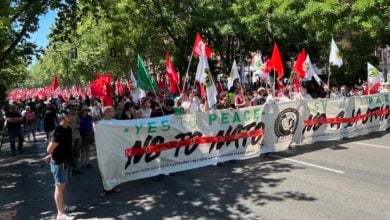 Madrid summit makes it clear: NATO is the enemy of peace