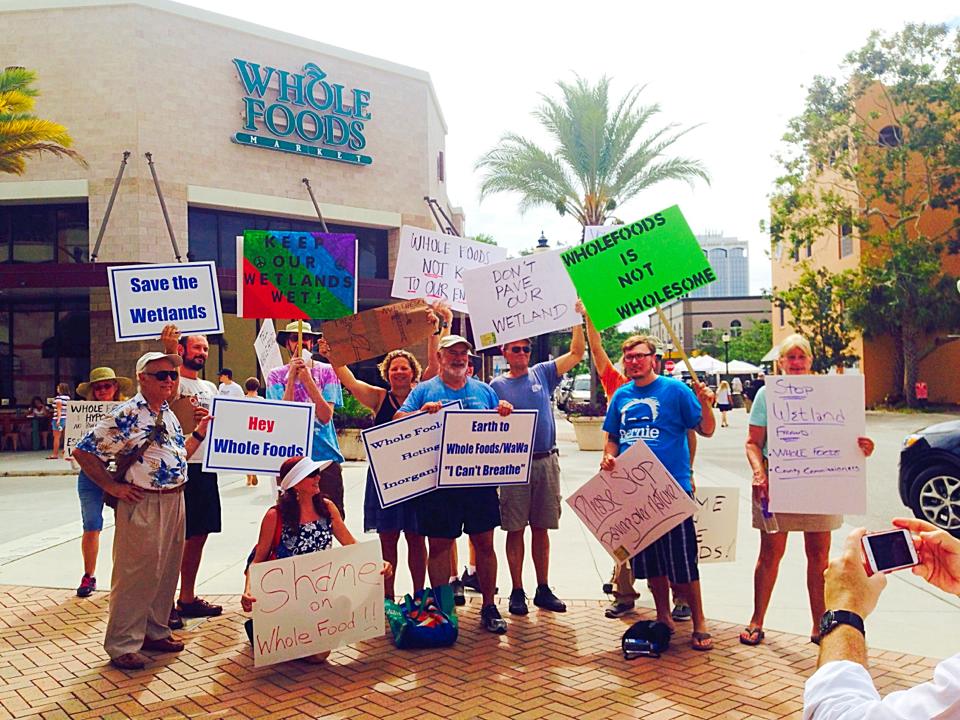 On June 11, two dozen people gathered in front of a Whole Foods Market in Downtown Sarasota to protest the anticipated destruction of 4.5 acres of protected wetlands. The grocery store chain, which lists “environmental stewardship” as one of its core values, has purchased the land in order to replace it with a parking lot. Protesters marched through the busy downtown farmers’ market chanting “Whole Foods, leave our wetlands alone!” and “Whole Foods isn’t wholesome!”

The destruction of this wetland goes directly against Sarasota County’s Comprehensive Plan, an official public document adopted by the Board of County Commissioners to guide decision-making related to the physical development of the County. The plan currently states that destruction of wetlands will only be allowed if there is no “reasonable alternative.” The County’s own staff have recommended against destroying this valuable habitat, stating that the particular wetland is “very rare in Sarasota County” and has “a high degree of environmental importance.”

Despite the fact that it violates its own policy, the Sarasota County Commission has chosen to approve the re-zoning of this land for development. Manasota 88, a local environmentalist group, is currently pursuing a lawsuit against Sarasota County for this reason. The court date is set for August 22. According to one of the plaintiffs, Andre Mele, the County’s decision is due to the influence of local developers who contribute to the commissioners’ political campaigns. “All five County Commissioners in Sarasota County are basically in lockstep with the developers,” said Mele. “They have an agenda to privatize public assets like conservation lands.”

Local elections in Sarasota are largely controlled by Political Action Committees. “The PACs become, in effect, a money laundering system for all the criminal activity. The bribes, the kick-backs, the extortion, this money funds local government campaigns,” said Mele.

The reach of these dark money PACs extends beyond the county commissioners. “The fact that there is currently a $100,000 race for the school board is unbearable.” Mele is referring to Eric Robinson, who he called “the king of dark money PACs.” Robinson’s wife, Christine Robinson, who currently sits on the Board of County Commissioners, has recently been selected to be the executive director of a local pro-business group called the Argus Foundation. The Argus Foundation has been at odds with local environmentalist groups for many years because of its pro-development agenda.

The Comprehensive Plan, which serves as the basis for the lawsuit against the County, is currently being gutted through an updating process. The draft of the new plan severely weakens controls on developers as well as environmental regulations. “The update is a nightmare, a morass of ambiguous language and last-minute developer-introduced changes to language that was more efficient and functional,” Mele told Liberation.

One example of the proposed vague language is a policy calling for zoning decisions to be based on “landscape context.” “This is an invention of, by, and for the developers,” said Mele. Furthermore, all amendments to the current plan are reviewed by the Sarasota County Planning Commission, which is made up of two developers and four top executives of construction companies.

The destruction of this 4.5-acre wetland is an indictment of the control that capitalists have on our local government. In the coming weeks, ANSWER Suncoast, Manatee-Sarasota Sierra Club, and others will be holding protests against the development of this protected land.