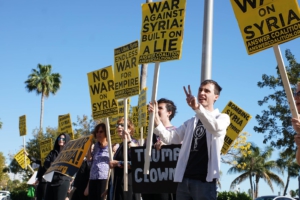 On April 7, 30 demonstrators protested in Sarasota against Trump’s escalated bombing of Syria, joining numerous other protests around the country. They gathered at the “Unconditional Surrender” statute at the bay front, holding signs reading “Endless war for empire” and “War Against Syria: Built on a lie!”

ANSWER Suncoast called the emergency protest in response to Trump’s illegal airstrikes on Al Shayrat Airfield in Homs on Thursday night. The bombing killed 14 people including 9 innocent civilians. Syrians have condemned the bombing as a “criminal act” and “war crime.”

“I came out here to defend Syrian sovereignty against imperialist aggressors,” said protester James Walker. “We gotta get out here and show we mean business. We have to show our solidarity with the Syrian people and their democratically elected leader.”

On the basis of several international agreements, the Syrian government disposed of its chemical weapons in 2014 under the supervision of the Organization for the Prohibition of Chemical Weapons. The move came after a 2013 chemical weapons attack in Ghouta killed hundreds of Syrian civilians. Opposition forces blamed the Syrian government for the attack, but later analysis determined that the rebels were likely responsible.

“I came out today because I oppose the U.S. getting further involved in wars in the Middle East. The number of civilian lives lost is astronomical,” said Aiden Juge, a student at New College of Florida. “I think the U.S. needs to start withdrawing from the Middle East and possibly work within the U.N. to encourage the people who actually live there to negotiate peace.”

Days before the chemical attack in Idlib, U.S. Secretary of State Rex Tillerson indicated that the U.S. would not seek to remove Syrian President Bashar al-Assad. The opposition, backed by Western imperialist nations and Gulf monarchies, was nearing defeat. The Syrian military would have had little reason to use chemical weapons, however a bombing raid could have set off sarin gas stockpiled by opposition terrorist groups.

“I feel like America’s actions regarding the Middle East have been very biased towards our own interests in oil as well as our racist tendencies against Muslims,” said local activist Lemon Reimer.

“We’ve eviscerated that entire region for 20, 30 years,” said Matt Cuffaro, who traveled from Tampa to join the protest.”I think it’s a serious step toward another endless war.”

Regardless of who was behind the chemical attack, all progressives should oppose Trump’s escalated war on Syria. As in Iraq, Libya and elsewhere, “humanitarian intervention” is no more than an excuse for the expansion of Western domination, the overthrow of independent governments and the acquisition of new markets and natural resources. The people of Syria deserve the right to determine their own destiny, free from the meddling of imperialists and foreign-backed terrorists who have for years brought the nightmare of war to Syria.