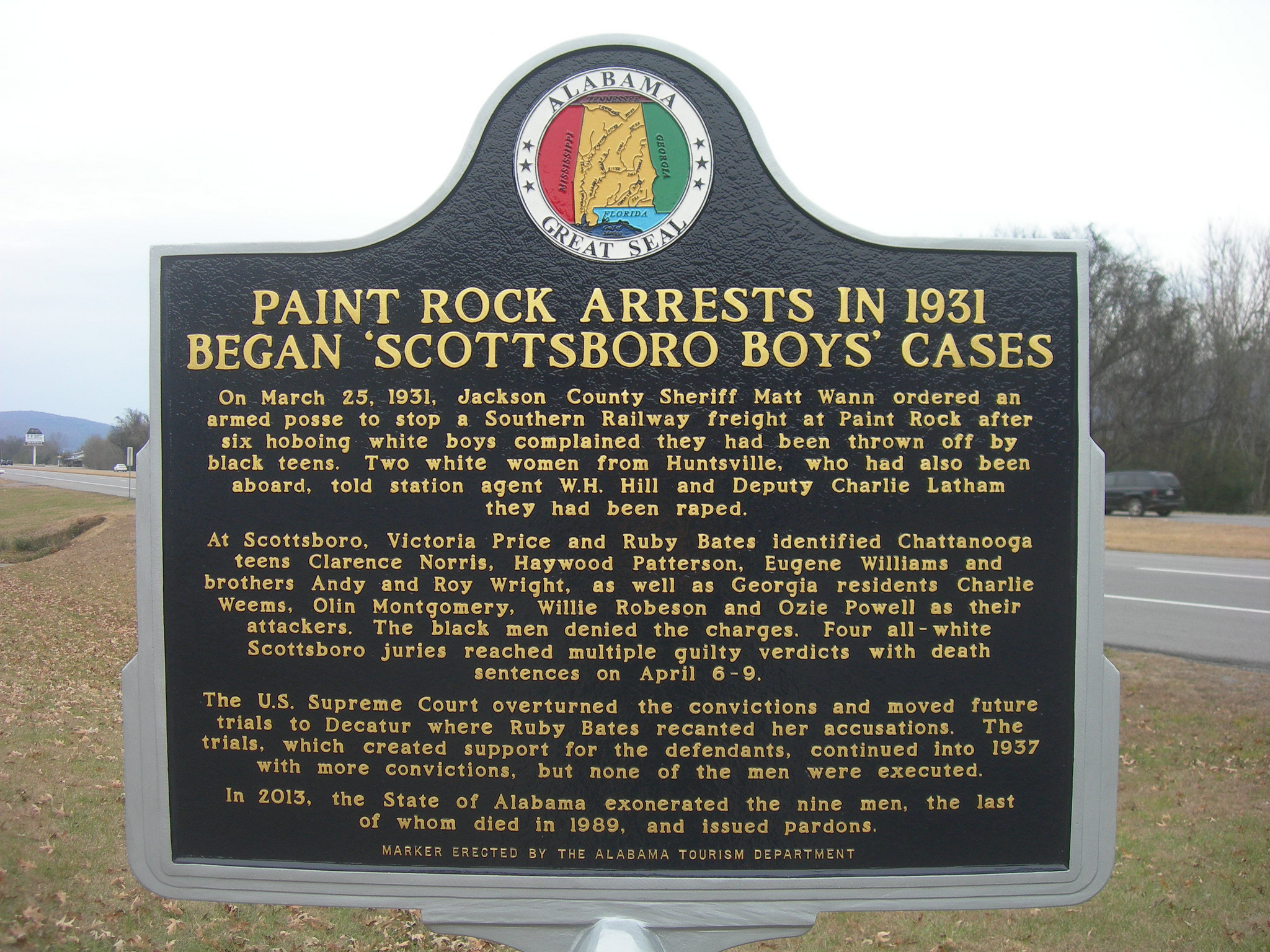 Eighty-seven years ago, on March 25, 1931, nine Black youths  ranging in age from 13-19 years-old, were pulled off a train in Paint Rock, Alabama by a sheriff and his deputies and subsequently charged with raping two white women. They had been on the train en route from Chattanooga, Tennessee to Memphis in search of work. All of them were brought back to the county seat of Scottsboro, Alabama where they were arraigned, indicted, charged, and found guilty of rape and sentenced to death by an all-white jury in no less than three weeks.

In his autobiography (Black Bolshevik) Harry Haywood, one of the leading Communist figures in U.S. history,  described the economic climate of the time and and its impact on the region: “The economic crisis (The Great Depression) had struck deeply into the entire region of northern Alabama, an area of mainly small, family-size farms and a few textile mills. Many in its largely white population were facing evictions and repossession of tools and livestock by the banks. In the textile mills, layoffs were throwing many out of work. But the sizable black population in the area suffered even greater hardships.” This is why the nine youths– Haywood Patterson (age 18) Clarence Norris (age 19),  Charlie Weems (age 19); brothers Andy Wright (age 19) and Roy Wright (age 12), Olin Montgomery (age 17),  Ozie Powell (age 16); Willie Roberson (age 16),  and Eugene Williams (age 13) were on a train seeking work.

Pamela Sterne King, Professor at at the University of Alabama at Birmingham, who researches the history of Jim Crown and the civil rights movement, had this to say: “This trial put a spotlight on the way Southern ‘justice’ worked at that time. In spite of the fact that, over three trials, there was no real evidence of the crime, the ‘boys’ were repeatedly convicted anyway. What was going on was these Southern white juries were intent on convicting the men with or without evidence. They had a point to prove and they were going to prove it no matter what the judge (who overturned the 1st verdict), critics, protesters, or anyone else said.”

Speaking with Liberation News, University of North Alabama student and long-time resident, Karah Wilson, had this to say: “I feel like the Scottsboro Boys in history is something that’s not talked about enough. It should be used as a prime example of racism and how some people did, and still do, everything they can to make a group of people look bad based on the color of their skin.”

The case caused an uproar in the Black community sparking protests in Washington D.C. and New York City. Harry Haywood and the Communist Party played a key role in bringing  the International Labor Defense into the struggle to save the lives of the nine youth. Communists were often the only white people who took a stand and spoke up for the Scottsoboro defendants, and mainstream civil rights groups such as the NAACP were initially reluctant to get involved.

What followed were a series of trials that eventually reached the U.S. Supreme Court twice, in 1932 and 1935 respectively. The Supreme Court set important precedent in requiring that African Americans not be excluded from the jury, as well as sending the case back to a lower court where a change of venue, was granted,  given the lynch mob atmosphere of the original trial.  While all but two of the defendants ended up serving time in prison, none were executed. Charges were dropped for four of the nine. Years later, these four were pardoned, three of them posthumously in 2013, which was seen as an admission even by the state that the case represented a grave injustice. The case has since been depicted in several documentaries, a TV movie and a full-length film.  In 2010, a Scottsboro Boys museum was founded adjacent to the square where the original trial took place in 1931.

As revolutionaries we should reflect on how the actions taken by communists at the time directly impacted the case. Had it not been for those like Harry Haywood and others who organized to save them, surely the outcome would have been  fatal to the young men at the center of the case. The struggles against racism, false imprisonment and mass incarceration are far from over, and represent a significant obstacle to class unity. All progressive and revolutionary people have an obligation to stand up for those falsely accused and railroaded by a racist system.