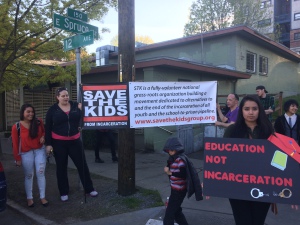 On March 31, over 40 people convened upon the King County Youth Detention Center in Seattle to protest the county’s imprisoning of children and young teens, who are disproportionately youth of color. The demonstration was organized by Save the Kids – Seattle which is a part of a national organization seeking to abolish the school to prison pipeline. Liberation News staff was there protesting the state’s aggressive and unjust incarceration of Black youth at the detention center  where they comprise over 50 percent of the jailed youth while representing only 10 percent of of the Seattle population.

An organizer named Sharon shared stories about her own children being treated more harshly in school for the same offenses as white students. She connected this with unfairly targeting students of color, some of whom were as young as second grade, and how this ultimately takes away from their education while contributing to the school to prison pipeline.

A young Black woman by the name of Judy also spoke of her experiences being a Black student at the famous Garfield High school where Dr. Martin Luther King had spoken, and the types of discrimination and mistreatment she faced and the fears she has for her own children. Judy went on to say to the crowd “We’re here at the youth jail because this issue matters. Our Black children matter and ended this oppressive institution is top priority.”

In an effort to reach the children egregiously confined in the cages inside the King County Youth Detention Center, protestors chanted loudly “Free the Youth, End the Abuse” and “Fund Jobs and Education Not Mass Incarceration.” Although the youth jail windows are not transparent, and thus we could not see the response from the outside, we were able to hear faint cheers from the children held within the jail as protesters dispersed.

A message that came from speakers and the crowd alike was an understanding that the root cause of the issue of Black and Brown youth being jailed is the capitalist system that profits from racism. By slashing education and taking away other opportunities from communities and specifically targeting young people of color, the 1 percent has devised a means that attempts to neutralize a sector of the working class they see as a threat. The problems of capitalism can only be cured by dismantling it and building a system built on true equality and human rights.