As a Holocaust survivor I never thought I’d see the day that our government, from the commander-in-chief on down, would kowtow in absolute obedience to the dictates of AIPAC (American Israel Public Affairs Committee) as though in the presence of an eastern potentate of yore. More powerful than all corporate lobbyists combined, AIPAC recently had all 100 senators goose-stepping to its edicts – every single one signing off on a resolution affirming Israel’s “right to defend itself,” Orwellian newspeak justifying the merciless battering of a virtually helpless population. To be sure, the right of nations to self-defense is a well-established international principle – but so is the right to resist oppression. But whereas nations habitually invoke the right of self-defense to cloak aggression – Hitler, too, claimed he was defending Germany – no such ambiguity can be said to exist with regard to the right to resist oppression, inasmuch as the oppressed are the ones with the boot on their necks, and not the other way around.

Back to our government’s unqualified support for Israel. So complete do our elected representatives identify with Israel that every ideal America professes to live by – freedom, liberty, equality, justice, as in the forever stamps – are put away like childish things.

Let’s rule out one interpretation from the start: atonement for our government’s role in barring refugees from Hitler’s Germany during the 1930s. That story has been ably told in the PBS video Deceit and Indifference: America and the Holocaust, as well as in two of Professor David Wyman’s books, Paper Walls and the Refugee Crisis 1938-1941 and The Abandonment of the Jews: America and the Holocaust. In the PBS film, Professor Wyman read the State Department memo that spelled out our contemporary policy vis-à-vis Jewish refugees. Refugees were to be kept at bay, the June 1940 memo issued to US consuls abroad stated, by “resort[ing] to various administrative advices which would postpone and postpone the granting of the visas.” The year before, the US had turned away a boatful of refugees clamoring to save their skins.

To judge by the unease on the part of the country’s Jewish citizenry, the longstanding love affair with Israel espoused by one administration after another does not seem to have filtered down to the population as a whole. In a 2013 poll conducted by the American Jewish Committee, 14% of Jews interviewed believed antisemitism was a “very serious problem” in the US and 67 % “somewhat of a problem.”

As far as standing with Israel as “the only democracy in the Middle East,” isn’t it about time we buried that hoary chestnut once and for all, given our support for such vile regimes as Egypt and Saudi Arabia? – To say nothing of Israel’s treatment of her indigenous Arab population as second-class citizens.

So what’s behind this caving in to AIPAC from one generation of our elected officials to another? It’s not a mystery. The overwhelming reality is that Israel is the most important outpost of US military might in the Middle East – a camouflaged base, but a base nonetheless – one of hundreds dispersed throughout the globe (662 in 38 countries in 2010, according to a Department of Defense report). Since Israel has no oil, it is difficult to come up with a more plausible explanation.

As history has shown again and again, Israel can do no wrong. It can gobble up Palestinian land. It can lay siege to Gaza and limit the amount of food that can enter. Most of all, it can make war on the ghettoized Palestinians, killing some 2100 civilians, including hundreds of children of all ages in the latest bloodletting – and all of it without the US blinking an eye. Winking instead, the US pours enormous quantities of sophisticated weaponry into the pipeline to Israel, more than enough to pulverize Gaza many times over, even as Israel breaches one international law and human rights convention after another.

When it comes to Israel, Democrats and Republicans stick together like super glue. Take Jeff Merkley. In a remarkable demonstration of bipartisanship, the very liberal Democratic senator from Oregon leapt across the aisle to link arms with the likes of Lindsey Graham and Mitch McConnell, two of the biggest reactionaries in congress.

Last Wednesday (August 27), I attended a rally in Portland to protest Senator Merkley’s unwavering support for Israel’s destruction of Gaza, a stamp-sized, densely populated area, with slingshot capability of withstanding the might of the world’s sixth most powerful military machine. Merkley was hosting a $500 a plate fundraising dinner attended by New Jersey Senator Cory Booker, to be followed by a film in a theater down the street. To my surprise, the venue of the senators’ confab was a Lebanese restaurant. Such evenhandedness is a rare commodity among our elected officials. But then, our senator is a liberal.

As our senator from Oregon was putting away the tabouli, kibbeh, labneh and home-made pita (no doubt ensconced in a private backroom), our group outside started reading the names of the roughly 2100 murdered Palestinians, punctuated at regular intervals by rousing choruses of “Shame on you, senator Merkley! Shame on you!”, adjusting the volume upward at names of murdered children. As it was getting close to dinnertime, the restaurant started filling up, and each time the door opened, a bullhorn made sure the senators got the message. Around 7, Merkley’s fellow diners and donors began emerging from their repasts, toddling off to the theater, flushed red in the face from too, too much of everything.

We knew our senator had to come out some time and had both exits covered, front and back. As expected, he sneaked out the back door, slipped into a waiting car and ran our “blockade.” We rushed over to the theater. Executing an end-round play to perfection, our intrepid dispatcher of bombs disappeared into the theater before we could catch up to him. A camera, however, snapped him entering by yet another back door, next to a couple of dumpsters. 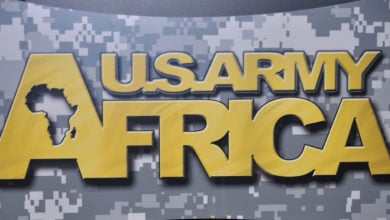 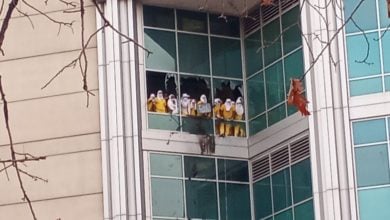 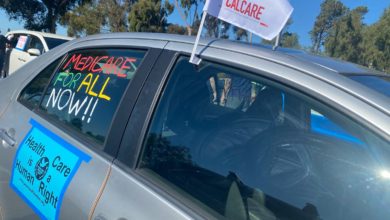