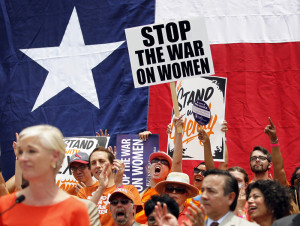 Three judges just denied access to abortion services to thousands of Texas women. This outrageous decision by a panel of the Fifth Circuit Appellate Court will immediately close 13 clinics because they fail to adhere to unnecessary regulations mandated by a recently passed law. The bill was famously filibustered last summer by politician Wendy Davis which opened the door for a mass intervention of women and their allies in Texas. Eventually, the right-wing, anti-choice forces were able to pass the bill into law where it has faced legal challenges.

The judges’ decision appears to hinge on the definition of “large fraction.” As in, will closing down 13 clinics in Texas prevent a “large fraction” of women in that state from accessing their right to a safe, legal abortion?

…one of the plaintiffs’ experts, Dr. Daniel Grossman, suggested that about one out of six Texas women seeking an abortion would live more than 150 miles from the nearest clinic if the surgical-center rules went into effect.

“This is nowhere near a ‘large fraction, ” the panel wrote. (New York Times)

As far as I am concerned, if even one woman is unable to access an abortion when she needs it, that fraction of the total number of women is too large. However, the judges seemed to think that it’s OK if one out of six women seeking an abortion lives more than 150 miles from an open clinic.

Perhaps in math, 1/6 is not a large fraction. But in real life, in a state with a population of 5.4 million women of reproductive age, one in six is a large number of women indeed.

This ruling will be challenged by abortion rights defenders. If there is any justice to be found in the courts, it should be overturned. But, that is a big “if.” The courts cannot be relied upon to defend our rights. Women and our allies need to be in the streets in massive numbers of outrage to protect our right to choose a safe, legal abortion. The courts are part of the capitalist state, and have as their primary purpose upholding the rule of the capitalist class and protecting their class interests.

The assault on women’s reproductive rights keeps women in a subordinate position in which we are more willing to accept the unacceptable, to take any job under any conditions in order to support our ever growing families, or spend our energies worrying about preventing unwanted pregnancy. This assault on our reproductive rights literally turns us into breeders against our will of the next generation of low paid workers. The alternative to mandatory motherhood is women risking and sometimes losing their lives in an attempt to terminate a pregnancy without proper medical assistance.

The Texas TRAP (Targeted Regulation of Abortion Providers) law is part of the incrementalist strategy of the right wing to whittle away at the right to abortion. The anti-choice right wing has been on the offensive for a long time. It’s time for the pro-choice movement to take a bold step forward into the streets.