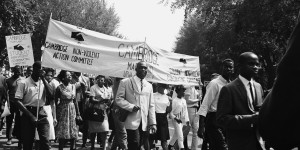 A recent study by a conservative research group showed more and more young people favor socialism to capitalism. The study, citing decreased job opportunities and a failing economy, concluded that young people have contradictory political ideas because they do not identify with either of the two major parties: the vast majority of youth in the United States favor socialist policies like guarantees to free education, healthcare and the necessities to life like food and shelter. On the other hand, they do not trust the US government, which would ostensibly be the provider of these services, leading Derek Thompson at The Atlantic to conclude that “millennials’’” political views “don’t make any sense.”

What leaves the researchers, Thompson and other commentators confused is their own cynicism when it comes to socialism. To the jaded, unimaginative and ignorant, the only option is to vote for small changes and to place faith in the existing system; to cynics, subversion—action to gain the things youth now consider basic rights—means simply pressuring Washington and maybe voting for progressive-sounding candidates, to move to one side or the other of the same two-party system, end of story.

It is impossible for these cynics to comprehend the need for a different system altogether—with different courts, parties and police—distinct from the present government.

This cynicism embellishes and obscures the problems of the existing system. It recognizes the problems but denies the solution. It sees exploitation and oppression, but encourages inaction; it is complicit with an exploitative society.

Youth, however, have time and time again risen above cynicism—the world is ours to gain, and we have historically understood that cynicism is defeatism without a try. The study shows this optimism and fighting spirit are strong in young people and aimed at a new society.

Student movements of years’ past have seized this optimistic enthusiasm and driven change. Students’ willingness to fight for solutions as radical as the problems makes students a particularly significant in terms of movements’ development, from opposition to the Vietnam War to the Occupy Movement. Our immunity to cynicism, in other words, forms the revolutionary soul of the student movement.

The combative character of student organizing can trace its origins back to the GI Bill, which allowed a significant number of soldiers returning from World War Two to attend colleges and universities for reduced tuition. The Bill led significant numbers of the working class to attain higher education for the first time in American history.

At the same time, the United States was going through a dynamic period of militant labor and other working class movements. 1946 saw the most strikes in the country’s history; the foundations of the Civil Rights Movement were forming; women had entered the workforce in record numbers. Taken together, mass struggle was reaching a high water mark.

Before that time, colleges and universities resembled junior yacht clubs, elite institutions for already-wealthy youth to secure prestige, professional connections, pomp and privilege. Beginning with the GI Bill, however, colleges and universities—receiving significant numbers of poor and working people for the first time in their histories—quickly became battlegrounds for mass struggle, with a distinct and specific class character.

By the late 1960s, the student movement had significantly changed U.S. progressive politics, which had been devastated after the McCarthyist attacks on the U.S. left. Progressive students—and later the progressive professors who had first entered higher education following the GI Bill—helped reinvent the Left in the United States.

It was this generation of progressives and revolutionaries that helped bring the opposition to the Vietnam War to a fever pitch, eventually posing such a threat to the ruling imperialist class that—combined with the steadfast and heroic resistance by the Vietnamese national liberation struggle—ended the U.S. occupation of Vietnam.

Many of the leaders of the Black Liberation struggle also came out of the student struggle, as the escalation of the fight for national self-determination escalated using SNCC as its vehicle. Once that struggle had progressed beyond Civil Rights and moved into the phase of Human Rights—as its demands for legal equality became demands for broader social equality—SNCC leaders like Kwame Ture (then known as Stokely Carmichael) became leaders in militant organizations like the Black Panther Party, demanding national self-determination and social equality.

This is a proud history for the student movement. Students across the United States stand on the shoulders of a decades-long history of struggle for human dignity, equality and democracy. That a college degree is synonymous with opportunities and advancement is the product of the militant and courageous struggle by workers in the 1930s and 40s, when working class students wrenched opportunities afforded by higher education from the hands of the one percent.

Not only should students today learn from and build on this proud history, but they should do so with enthusiasm. A strong student movement can only enhance and even play a critical role in pro-people struggles, from smashing sexism, defending unions, combating racism and beyond.

The author is a student at American University.