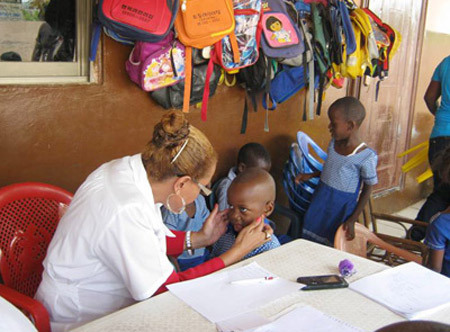 While President Barack Obama is talking about “quick action,” revolutionary Cuba has responded with the largest medical team of any country on the planet. Cuba has sent 165 medical professionals who are now in Sierra Leone, and an additional 296 are to be dispatched to Liberia and Guinea.

These medical professionals are seasoned in natural and epidemiological disasters from work on numerous other medical missions in other countries. The team has over 15 years’ experience in such crises according to Roberto Morales, the Cuban Minister of Public Health.

This is one act of solidarity among many that Cuba has offered Africa to enhance the health of the people and address health crisis over the last 55 years. Currently, Cuba has 50,000 medical personnel in 66 countries.

The solidarity and care by the Cuban doctors and nurses certainly is the response needed as opposed to Obama’s 3,000 U.S. troops sent to the region to “coordinate efforts.” Cuba is answering the call of the World Health Organization with the largest team of any country on the planet—countries with many-fold more resources.

To understand the immensity of the response of Cuba, even the imperialist Washington Post had to cover the Cuban reaction to the crisis with a glowing article entitled “In the medical response to Ebola, Cuba is punching far above its weight.”

More than 6,000 people have been infected with Ebola so far and nearly half of them have died from the virus. Ebola virus is contagious. It requires close contact with some bodily fluid, such as blood or vomit that has active virus in it. An infected person is only contagious for a limited period of time. Based on mathematical calculations, a person infected with Ebola infects 1.5 to 2.0 other people—about the same “infectiousness” as Hepatitis C mathematically.

Therefore, the medical response by Cuba and other countries internationally is key in treating those who are sick and preventing the spread of the virus by setting up an emergency medical infrastructure that is lacking in West African countries dominated by imperialism.

As Dr. Margaret Chan of the World Health Organization said in the Washington Post article: “Human resources are clearly our most important need.”

Revolutionary Cuba can respond to that need because Cuba has prioritized building a universal health system outside of the profit system. And the solidarity with the peoples of the world is the underpinning of the hope of a world where people’s health is primary. Cuba’s actions not only will play a huge role in stopping Ebola but stands as an example of the power of a more advanced social system.