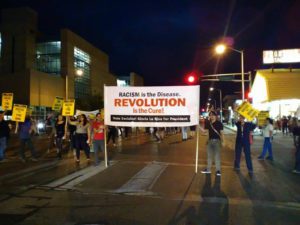 In an emergency action on Sept. 22 at the University of New Mexico called by the Albuquerque PSL, Black Ops of UNM, and the Center for Peace and Justice, scores of Albuquerque residents gathered to protest the recent spike in police murders.

The action began with protesters gathered around an open mic, voicing their anger at the deaths of innocent civilians such as Terrence Crutcher and Tyre King and how the media immediately portrayed the victims as criminals while excusing the murderous actions of the police. They expressed their horror at the police shooting into a crowd of protesters in Charlotte, North Carolina. Many of the speakers became very emotional during their speeches, demonstrating the extent to which these headline stories ignite terror and sadness within themselves and their families.

However, many other speakers called for revolutionary action against the racist police state. They pointed out that the issue is not whether protesters are being “violent” or “aggressive,” but rather that reactionaries and racists prefer that they do not protest to begin with. It doesn’t matter whether the protesters use violence, non-violence, or even the simple act of sitting down during the National Anthem, as did Colin Kaepernick. Any form of protest against racism and police violence ignites anger in those who would prefer to maintain the status quo. The protesters called for more disruptive action, rather than simply picketing and peacefully protesting, for they felt that their voices weren’t being heard.

This was realized near the end of the action, when the protesters took to the intersection and blocked traffic both ways, chanting “Black Lives Matter” and demanding justice for the most recent victims of racist police terror. This is the second time within a matter of a few months that the Albuquerque community has blocked an intersection in the name of Black victims of police violence. 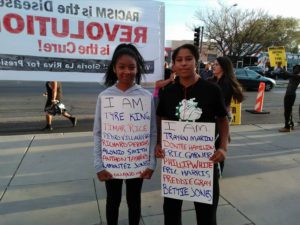 While several police cars parked a block away and eyed the protesters, some angered drivers got out of their cars and confronted the protesters, one even becoming aggressive as she tried to rip the placard from one protester’s hands. Regardless, the protesters remained steadfast in their place and all took a knee for a moment of silence for those killed.

The people are tired of demanding their right to exist without fear in non-violent manners and being ignored. They are tired of being told how they should feel and how they should react to their own neighbors and family members being slaughtered in the streets, and rightfully so. In 22 days after Kaepernick first protested the National Anthem, police murdered 67 more civilians, 19 of them Black. This shouts arrogance on the part of police nationwide, who have long since known that they can murder innocent people, especially people of color, and get away with it.

When a case of a police officer shooting a civilian makes nationwide news, we always see reactionaries defending police, constantly making “good cop, bad cop” arguments, and denying that racism and violence towards the Black community is a systemic issue. Following the nationwide protests that erupted in the wake of the murders of Philando Castile and Alton Sterling, police officers all over the nation came out and testified that their superiors encouraged them to racially profile civilians in the streets. One even recorded the conversation between himself and his superior officer, who was reprimanding him for not meeting a quota of Black men he was supposed to pull over and search.

What more evidence is needed as proof of systemic racism and police violence towards the Black community than to hear it straight from the horse’s mouth? Yet, even with all the proof and contradictions present, racists continue to scorn the Black community for protesting and demand that everyone remains “peaceful”, or rather, obedient to the status quo of white supremacy.

The revolutionary Black community of Albuquerque has called for more militant action against the police state and many even for an outright revolution. The people are seeing the contradictions and realize that reform will never solve the issue of racism and police violence, as it is impossible to fix a system that was never really “broken,” but rather designed to oppress the masses. As one of the speakers put it, “it’s not about resisting the system; it’s about dismantling it entirely.”