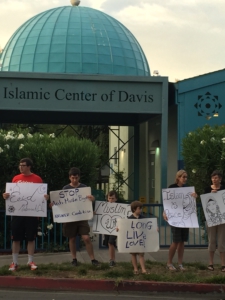 Two hate crimes took place at Sacramento area mosques as Ramadan was coming to an end. On the afternoon of June 24, a burned Quran filled with bacon was found handcuffed to a fence outside the Masjid Annur Islamic Center in Sacramento. The fence separates the site from a neighboring Sheriff’s Department station. The previous evening during Ramadan prayers, a desecrated Quran was thrown from a passing car at the Islamic Center of Davis, littering the front of the mosque with pages from the Quran. 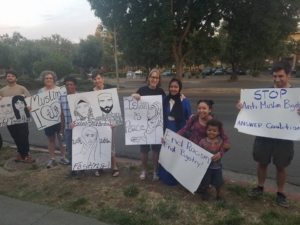 In addition, these Sacramento area acts of hate follow the recent sentencing in Davis of Lauren Kirk-Coehlo. In January, Kirk-Coehlo committed a hate crime against the Islamic Center of Davis in which she broke windows and put bacon strips on the handles of the building. Kirk-Coehlo had praised Dylan Roof on Twitter. Following her crimes, 1,000 community members rallied in Davis in solidarity with the Muslim community. 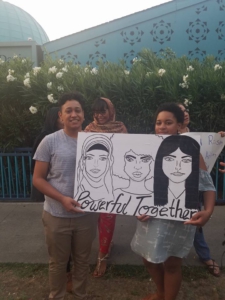 Lauren Kirk-Coehlo, a white woman and former Google employee, pled guilty to the felony of hate crime and faced six years of prison. On June 18, it was announced that she would receive only five years–of probation! This stunned many in the community who were concerned the lenient sentence would encourage similar hate crimes, like the ones that took place most recently.

On June 25 following the most recent hate crime in Davis, community activists including A.N.S.W.E.R. Coalition activists quickly mobilized to show their solidarity with the Muslim Community by gathering in front of the Islamic Center of Davis in a solidarity event. Activists held signs reading, “End Racism and Anti-Muslim Bigotry,” “Are You Muslim? We Love You” and celebrating the beginning of Eid. Members of the Mosque invited the activists to break their fast with them and celebrate the beginning of Eid. 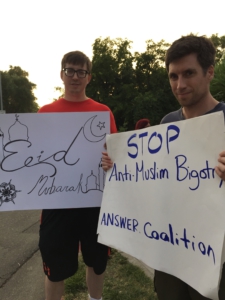 There has been a staggering increase in the rise of hate crimes against the Muslim community in the U.S., mirroring ever widening U.S. imperialist war on the Middle East and encouraged by the officially sanctioned bigotry of the Trump administration. The number of hate groups in the U.S. continues to rise. Only steadfast solidarity among all communities of the poor and working class will turn back the tide of racism and hatred and defend our communities.