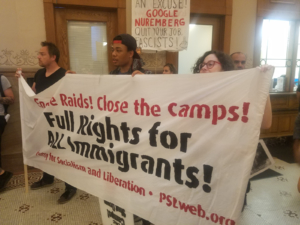 Despite the stimulus bills and bailouts to corporations, large segments of the population have not seen any help at all. Essential workers have always been essential, and with the spotlight placed on them it shows just how much they are needed. One such group are the farm workers who pick the food that we see in grocery stores. Farm workers across the country are making the “choice” to go to work and possibly get sick or stay home and starve. Yet without them, the food supply chain would break down.

The agricultural industry in the United States has always relied on migrant workers, both with and without papers. The Department of Labor officially puts the number of undocumented farm workers at 46 percent of the total number of farmworkers, but industry experts and labor advocates estimate that the number is much, much higher — possibly closer to 70 percent.

Exploiting workers is the very essence of capitalism, and racist immigration laws have played a key part in that exploitation in an effort to divide and conquer the working class. During this pandemic, the Trump administration has proposed  lowering H-2A worker wages in order for large agriculture to be more profitable. In addition to slashing wages, Trump is expected to provide a $16 billion bailout to agribusiness nationwide. There are 12 million non-citizen workers in the United States currently. These workers do not show up on the unemployment rolls, nor do they qualify for benefits, despite paying taxes. While farm laborers and migrant workers risk their lives on the fields, being deemed an “essential worker” in these times means their lives are actually disposable in the eyes of capitalists.

Farm workers and other migrant communities are considered essential yet they are still being terrorized by ICE. As ICE raids and detention continue, the fear of COVID-19 rises with more deaths and the spread of the virus. While social distancing doesn’t exist in fields it also doesn’t exist in detention facilities. According to a March 19 tweet from Department of Homeland Security acting Deputy Secretary Ken Cuccinelli, ICE “will continue to prioritize arresting and removing criminal aliens and other aliens who pose a threat to public safety.”

State  terrorism against immigrants is so business-as-usual that ICE agents are regularly being given scarce resources such as N95 masks that should be used for protecting healthcare workers during the pandemic. While people can deny entry to ICE at their homes, they are at the employers’ whim during the workday. ICE uses the need of workers to sell their labor to capitalists as a way to carry out these racist, terrorist raids.

At detention centers, which lack soap and other necessary sanitation supplies for detainees, guards and detainees are in close contact without use of personal protective equipment, leading to the spread of the virus. The lack of these items will undoubtedly make detention centers and prisons epicenters for outbreaks. Those in detention should not have to prove their humanity during a pandemic. While they are forced to do so, the crisis has also continued to lead to struggle and new avenues of resistance.

Hunger strikes have ensued demanding the release of those incarcerated in detention, especially the elderly, pregnant, and immunocompromised. In Bakersfield, where over 100 non-citizen workers have been striking, Charles Joseph stated. “They’re literally turning our detention into a death sentence,” he said. “It’s not a matter of if COVID-19 comes here, it’s just when.” (Bakersfield News)

Yet despite the detainees’ courage, ICE is lying about the hunger strike. “There is no hunger strike occurring at the U.S. Immigration and Customs Enforcement Mesa Verde Detention Facility,” ICE spokesman Jonathan Moor said in an email. (Bakersfield News)

Detainees will not be sitting ducks. As ICE lies, a daily average of 42,000 people remain in detention centers in the United States. They should all be released now! Hunger strikes and refusal to return to dorms are just some of the ways detainees are demanding more hygiene supplies, soap that is not diluted, masks for staff and themselves, that no more people be processed into the detention centers, and more precautions be taken for their safety and health. Some of the hunger strikes that are underway are in New York’s Hudson County Correctional Facility, Essex County Correctional Facility, and California’ Mesa Verde ICE Processing Center in Bakersfield.

All progressive and revolutionary people should stand in solidarity with those striking and support any way to release those incarcerated and in detention!

Sign the PSL petition in defense of non-citizen farmworkers.