Education workers and members of the Party for Socialism and Liberation from across the country are working to build solidarity in their schools and neighborhoods with the striking L.A. teachers. The following is our solidarity statement — we encourage you to copy and paste it on social media and to send it to friends, family members, neighbors and co-workers. If you are an education worker fill out this form to sign on.

We are education workers from around the country who express our solidarity with the tens of thousands of the Los Angeles teachers who have gone on strike. L.A. teachers have the support of their students and neighborhoods, and also people from around the country. They are demanding smaller class sizes, more librarians, more input from teachers in school operations and better working conditions. Such changes are needed in school districts nationwide, and we applaud the L.A. teachers for courageously taking a stand. We demand that Austin Beutner, the Los Angeles Unified School District (LAUSD) superintendent, stop his union-busting tactics!

How we got here

The United Teachers of Los Angeles (UTLA), representing 33,000 education workers, has been in negotiations with the LAUSD since April 2017.

In May 2018 the Los Angeles Board of Education charter school advocates selected investment banker Austin Beutner as superintendent of LAUSD. Beutner had no experience in leading a school, let alone a school district, yet he was chosen to lead the second largest school system in the country. Beutner also became a key negotiator for LAUSD.

Superintendent Beutner was meeting with consultants from Kitamba, an architect of privatization and charter school efforts, and charter-friendly Board of Education members. With Kitamba consultants, he developed a secret plan, which was then leaked, to break up LAUSD into 32 smaller “portfolio” districts.

The portfolio model forces the clusters of schools to compete against each other for resources and support, creating a system of “haves” and “have-nots” and exacerbating segregation and equity issues.

The UTLA members are negotiating for a strong contract that improves the quality of education for their students. The six key demands are:

Beutner claimed there was no money for these improvements despite LAUSD sitting on almost $2 BILLION in reserves. Union members responded with a 98 percent approval to strike if necessary.

By mid December UTLA called on the support of the community for a “March for Public Education”. The community strongly responded and 50,000 people marched in unity with the UTLA members and students.

In Los Angeles, the biggest city in the state, the government spends about $11,000 for each student in a year. The state, with its notorious mass incarceration policies, spends over $70,000 to lock up a single inmate. Childhood poverty in California is greater than in any other state in the country.

All children deserve for these basic demands to become reality. All youth deserve healthy and robust schools where they are able to survive and thrive. The UTLA is at the forefront of saving public schools and we must stand with them!

What happens in Los Angeles will serve as an example for other public school districts who are under attack by Wall Street and Corporate America who want to make a profit off education.

What everyone can do to support

If you’re in the Los Angeles area, show up to your local public elementary, middle or high school at 7am. Walk the picket line with the teachers and wear red. If your in another part of the country keep up to date with the UTLA.net website and social media and talk to your friends, co-workers and family about the teacher’s struggle. The PSL has created this hand sign to print and write your solidarity message and post a selfie with the sign onto your social media using the hashtags #UTLAStrong  #StrikeReady and #March4Ed. If you are an education worker fill out this form to sign onto this solidarity statement. 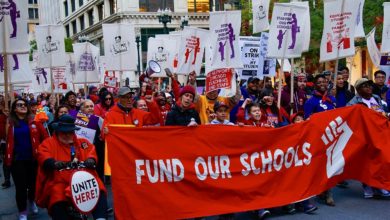 Fight for public education and make it a right!