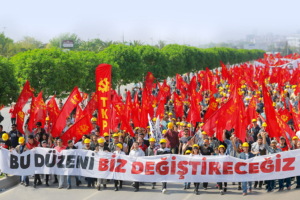 The Party for Socialism and Liberation sends revolutionary greetings to the Communist Party of Turkey (TKP) and extends its best wishes for the utmost success in their electoral campaign for upcoming municipal elections on March 31, 2019.

As the party of the working class, TKP is the only revolutionary force in the elections that is putting forth the class struggle against the rule of capitalists. We are following with excitement and inspiration the electoral campaign that TKP is conducting with the slogans “Against the reign of capital, the people have TKP” and “We are not in the same boat”.

With a list of mayoral candidates who are all workers themselves and the Party’s militants out on the streets engaging with the working class and the poor all over Turkey, presenting them the program for socialism, we are confident that TKP will emerge from these elections having raised the class consciousness and won many workers to the fight for socialism.

It is our firm conviction that the victory for a working class revolution in any country depends on the presence of a strong revolutionary party that will lead the working class in the struggle to overthrow the capitalist class and fulfill its historic mission by constructing socialist society where the political and economic power is in the hands of the workers. In Turkey, TKP is that revolutionary party.

The Party for Socialism and Liberation once again expresses its international solidarity with TKP and wishes great success in the municipal elections next week.