Solidarity with Wet’suwet’en shuts down Canada 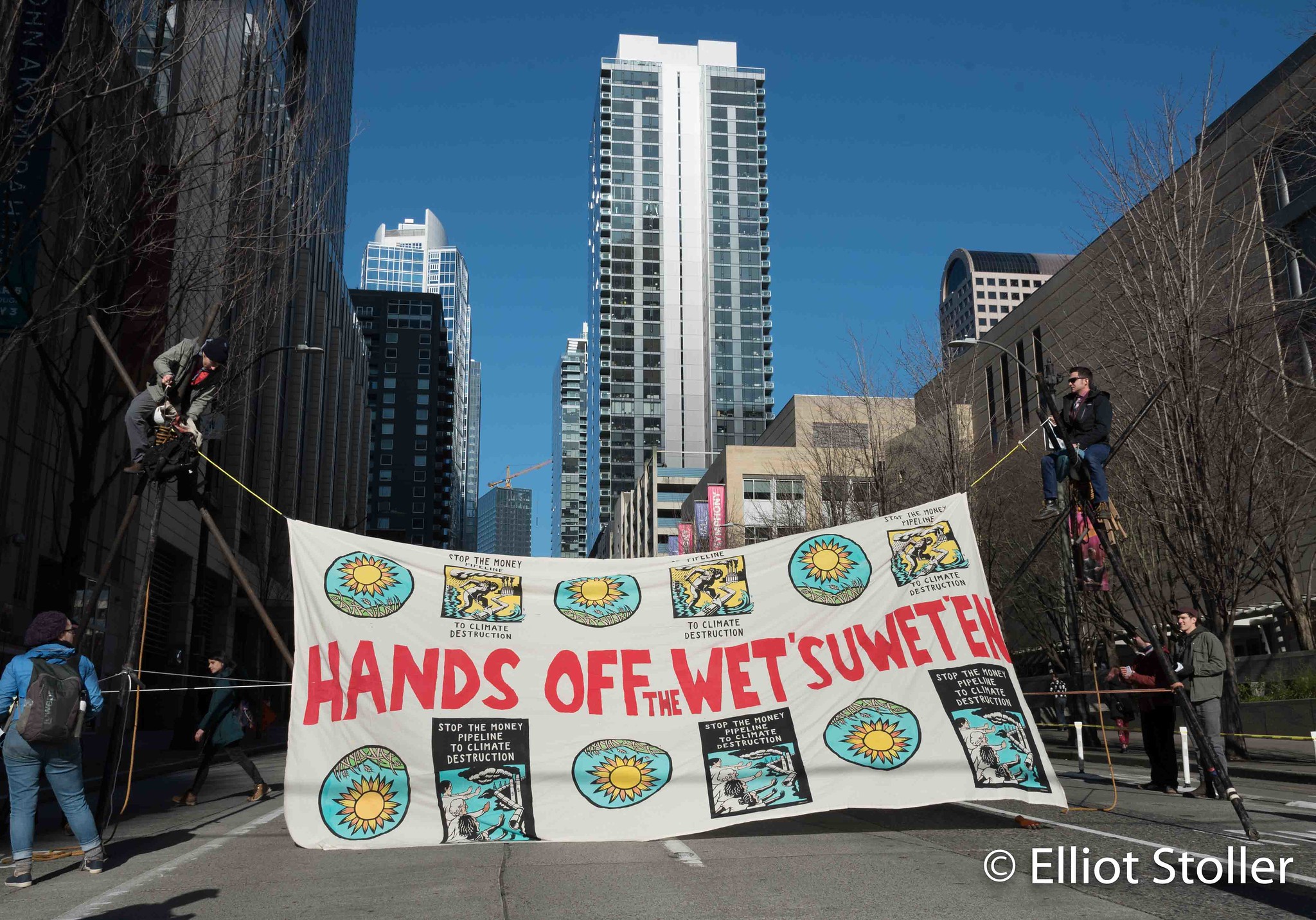 Since the beginning of European settler colonialism in North America, Indigenous people have shown incredible resilience and resistance. Now, what began with a single First Nations band fighting to stop a natural gas pipeline from destroying their homeland and threatening their people has erupted into a full scale, multinational resistance movement against colonialism and corporate greed.

In the early 2000s TC Energy, a multibillion dollar energy corporation also responsible for the controversial Keystone XL pipeline, initiated plans to build a natural gas pipeline through the province of British Columbia. However, it is important to note that 95 percent of British Columbia is in fact unceded Indigenous land.

This means that despite the Canadian government’s history of illegal seizure of these lands and the forced relocation of First Nations people onto Reserves, only a small percentage of First Nations have ever signed a treaty affirming Canadian settler occupation.

Concern over the damage gas pipelines would cause to their environment and communities led to the Wet’suwet’en chiefs passing a resolution that they would not allow any pipeline construction in their unceded territory. As a route for the pipeline was planned, they responded by starting Unist’ot’en camp, which they describe as “Our clan occupying and using our traditional territory as it has for centuries.” The initial structure was a cabin that sat in the direct path of the proposed pipeline, and has since expanded into a small community and a self-described “healing space for Indigenous people and settlers alike, and an active example of decolonization.”

In blatant disregard of the higher court ruling in 1997 and the sovereignty of the Wet’suwet’en people, B.C. Supreme Court Justice Marguerite Church granted an injunction filed by TC energy against the Unist’ot’en camp in December 2018, giving them permission to dismantle the camp and any other obstructions in the path of their pipeline. Unist’ot’en camp responded by blockading entrances and peacefully escorting pipeline workers and equipment out of the territory. On January 8,  2019, the Royal Canadian Mounted Police attempted to enforce the injunction and arrested 14 people maintaining one of the blockades. The RCMP withdrew after negotiations resumed, but this was short lived as no agreement was reached, leading to Church re-instating her injunction in December 2019. As the camp refused to withdraw, the RCMP reentered the territory and on February 6, militarized police raided the camp itself, violently arresting land defenders and Unist’ot’en matriarchs at gunpoint. At the time, the matriarchs were performing a ceremony honoring missing and murdered Indigenous women and girls.

While environmental and traditional land rights are often cited as the reason for these land defense actions, it is no coincidence the camp was addressing the ongoing, rampant sexual violence and murder of Indigenous women and girls, as the issue is closely linked to the construction of these pipelines.

In a statement released Feb. 3, the Wet’suweten Heredetary Chiefs asserted that allowing TC Energy to continue building a fracked gas pipeline would not only result in environmental damages, but that allowing the work camps on their land would further contribute to the growing epidemic of violence against Indigenous women. The release cited the final report of the National Inquiry into Murdered and Missing Indigenous Women and Girls (MMIWG), which found that “work camps, or ‘man camps,’ associated with the resource extraction industry are implicated in higher rates of violence against Indigenous women at the camps and in the neighbouring communities.”

It is also no coincidence that the RCMP was called in to brutally enforce the injunction and deny the sovereignty of the Wet’suwet’en people. Despite the romanticized image of the “Mounties,” The RCMP was established in 1873 as the North-West Mounted Police to violently quell Indigenous resistance and self-determination. Rebranded as the RCMP in 1904, it has since transformed into a far reaching and controversial federal police force that has been used to continuously suppress and harass Indigenous people, ethnic minorities and popular left wing movements.

Despite the arrests and raid on the camp, the Hereditary Chiefs and the land defenders have refused to back down, instead calling for nationwide protests. In widespread displays of solidarity, protesters, many of them from other First Nations throughout Canada, began non-violently but militantly staging protests and sit-ins at government buildings, disrupting ferry services and blockading ports and railways that carry large portions of Canadian commerce. While many of these protests were eventually cleared through injunctions and arrests, the rail blockades that began with the Tyendinaga Mohawk people near Belleville, Ontario, have grown large enough that rail companies have partially or completely suspended operations, admitting that these powerful solidarity actions have left them unable to operate.

While the Canadian Media and Corporations are trying to portray these actions as divisive and harmful, the movement to defend the rights of Indigenous people is uniting Native and non-Native Canadians alike. At the time of this writing, hundreds of organizations, unions, and tribal nations have written statements of support for the Wet’suwet’en people and have called upon the Canadian government to honor their right to their traditional and unceded lands. Massive support for the movement is also trending on social media, with hashtags like #shutcanadadown #reconiliationisdead #rcmpgetout #wetsuwetenstrong flooding the internet.

The Canadian Government officially proclaims an official policy of “reconciliation” with First Nations, Inuit, and Metis people, but it is clear through their actions that government officials, courts, and police have sided with energy corporations that value profit above all else.

While the RCMP has issued misleading statements that they are willing to leave the territory and Prime Minister Justin Tredeau has called for talks to resume, they have not yet made meaningful steps to resolve this conflict. It is time for the Tredeau government to actually honor their professed commitment to Indigenous people and remove TC energy from Wet’suwet’en lands. All progressive and revolutionary people should stand in solidarity with the Wet’suwet’en First Nation, the land defenders, and with all Indigenous peoples asserting their right to sovereignty!