The groups Raise the Wage and LA Street Vendors united on the steps of the Los Angeles City Hall October 27, to protest the continuing harassment and ticketing of people selling food, books, clothing, jewelry and other items on the street. It’s a tradition that stretches back to at least the 1900s in Los Angeles as well as other major cities. However, Los Angeles has made the practice illegal, and threatens vendors with deportation in addition to steep fines and multiple ticketing.

Although the struggle to legalize street vending dates back to 1989, this current phase began in 2013, and since then, over 1200 people have attended numerous public hearings. The outcome of the Oct. 27 meeting was for city officials to merely push the decision further into the future due to continuing pressure from local merchants and city officials themselves. As has happened in almost every major city across the country, downtown Los Angeles has become heavily gentrified, with over-priced “brick and mortar” restaurants pushing out long time merchants and small, affordable, family-run 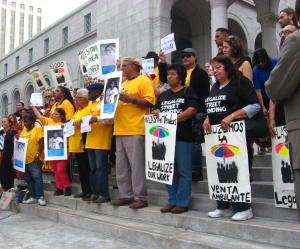 For many working class people, street food vendors offer an affordable alternative and have even become “fashionable” among hipsters who are out late, after most restaurants and other businesses have closed. Street vendors face an array of state repressive agencies, from the Los Angeles Police Department, to the Department of Public Works (DPW) and even the Bureau of Street Services (BSS). BSS citations are misdemeanors and involve the City Attorney. They carry fines up to $1,000 and/or one year in jail. In a one year period, from 2013-14, the BSS reported issuing 412 citations and the LAPD issued nearly 900 citations. However, even these numbers do not reflect the actual number of citations and tickets, which are under-reported, as is the daily harassment vendors face at the hands of the police. The vendors, however, are not giving up and continue to organize. They are being joined by other community organizers, including: UNITE HERE Local 11, CHIRLA, Answer-LA, Koreatown Immigrant Workers Alliance (KIWA) and many others.