After a nine-day Unfair Labor Practice strike beginning on Jan. 12, workers at Colorado’s largest grocery store chain King Soopers, who are members of United Food and Commercial Workers Local 7, won a major victory. On Feb. 1, workers across 78 stores in Denver, Boulder, Broomfield and Parker voted in favor of the new contract.

The new three-year contract, which covers over 8,000 employees, includes raises ranging from $2 to over $5 an hour, improved healthcare coverage, better pension plans, and new pathways for part-time workers to become full-time, as well as greater health and safety measures. This is a historic strike in the industry since it was the first extensive Denver area grocery store walkout since 1996, and the contract includes “the most significant wage increase ever secured by a UFCW local for grocery workers and includes first-year wage increases for long standing employees,” according to UFCW Local 7. Their strike also pressured King Soopers to promise to add up to 500 more jobs, taking some of the burden off understaffed workers who have struggled with the increased workload during the pandemic.

Like many others in the service sector, grocery store workers have been some of the worst-hit by the pandemic. Many of the workers are at increased risk of catching COVID due to the amount of interaction with the public on a day-to-day basis. While at the beginning they were hailed as “heroes,” now many of them are being physically and verbally abused by customers. To make matters worse, many of the benefits that these workers received during the beginning, such as hazard pay and sick leave, have been taken away even though we are now seeing increasing hospitalization and death rates with the new variants of the virus.

Tina Myers, who has worked for King Soopers for over 30 years, talked to Liberation News about the frustration many workers feel about the lack of support during the pandemic: “They gave us $2 hazard pay when the pandemic started. But then they took it away. Now that the pandemic is bad again, and everyone needs to wear masks and take precautions, they aren’t paying us any extra. We are putting our lives on the line. We need the extra money.”

Many King Soopers workers are facing other dangers aside from the risk of catching COVID. Liz Wesley, a King Soopers floral department worker, said to local media, “I have had a guy with a machete run through my department threatening people. There was the Boulder store shooting. It is a real threat, a real worry for people in these stores.” The improved health and safety measures won in their new contract begin to address workplace safety issues like these.

Not only do grocery workers face workplace hazards on the floor, but they also are unable to afford their daily necessities from food to housing. According to a recent study in which 29 percent of the Kroger workers surveyed worked at the company’s King Soopers subsidiary, “nearly two-thirds of Kroger workers say they do not earn enough money to pay for basic expenses every month.” Around 14 percent of Kroger workers faced homelessness within the last year and around 36 percent of workers were worried about being evicted from their homes — specifically among younger workers ages 21 to 29, among whom 53 percent can’t afford their rent. Over three-quarters of employees suffer from food insecurity, highlighting the extreme contradictions of capitalism where the grocery workers who feed our communities are going hungry. Eighty-five percent of Kroger workers who are single parents face food insecurity. And over 9 out of 10 won’t be able to afford to survive if they retire, leaving workers stuck in extremely precarious conditions for the rest of their lives.

Kroger workers have struggled to secure food, housing, and healthcare while seeing their real wages decline up to 3 percent since 1990. Meanwhile, King Soopers as a subsidiary of Kroger has seen record profits during the pandemic. In 2020, Kroger saw 4 billion dollars in adjusted operating profits, which was $1 billion more than the year before.

In the past 20 years, the grocery store industry has prospered off the backs of workers, with sales growing from $536 billion in 2000 to $649 billion in 2020. In 2020 alone, grocery sales grew by 11 percent according to the U.S. Census Bureau. Grocery store companies are finding ways to cut their labor costs and profit even more by employing workers part-time and employing less workers. For example, the number of cashier workers has declined 18% in the last 20 years.

Troy, a Denver King Soopers worker put it perfectly in an interview with Liberation News, “The [Kroger] CEO had a $22 million bonus, and that was probably just their most recent one. We’ve been working on these front lines from the beginning of this thing. And now the company is saying WE’RE greedy! I’m sorry, I didn’t get a $20 million bonus! We are the ones bringing the money into this company. The CEO doesn’t bring any money into this company.”

Right before their strike, UFCW Local 7 turned down King Soopers’ offer that would have raised workers’ pay up to $4.50 per hour for the contract’s first year in addition to bonuses and improved healthcare, because the wage increases weren’t enough. After declining that offer and voting to strike, workers were able to add pressure and win a wage increase of nearly $6 per hour for some workers from the largest supermarket chain in the country.

During the strike, King Soopers pushed for a temporary restraining order against the workers, which was granted by a judge on Jan. 18. The company made a number of false claims in an attempt to attack the union, saying that striking workers were telling customers the stores were closed or prompting noise complaints from neighbors. The union responded saying that these were untrue and the company never brought up these supposed issues during negotiations. Clearly, this was nothing more than an attempt to suppress the workers. After the restraining order, UFCW Local 7 continued their strike, but workers were limited to gathering in groups of 10 or less, were forced to picket further from the store, and not allowed to block customers or cars.

Solidarity amongst the workers and with community members across Colorado was essential to the victory. Even retired King Soopers workers joined the picket line, including Bob Lopez who was a picket captain in 1996 and a retired meatcutter who worked at King Soopers for 35 years. He came with his daughter to support the strike. Nearby Black Rock Coffee Bar workers also joined UFCW Local 7’s picket in solidarity, in addition to at least one Instacart worker who refused to cross the picket line. Members from the Party for Socialism and Liberation supported the King Soopers workers picket where they interviewed workers on strike.

Union locals supported the Kroger workers’ struggle including CWA, AFT, SEIU, IBT, AFSCME, along with the Colorado AFL-CIO, and Coloradoans for the Common Good. Furthermore, union members from across the country came to Colorado to help organize and run the pickets, including from UFCW locals in Seattle, southern California and New Mexico. United Latinos of the UFCW also joined the picket, including President Rigo Valdez, who walked the line on Martin Luther King Day weekend. The union made the point that King was supporting striking sanitation workers at the time of his assassination. Even politicians like Mayor Michael Hancock felt the pressure to voice support on MLK Day, asking people to not cross the picket line and telling the workers, “You deserve livable wages. You deserve healthcare benefits.”

UFCW members mentioned the context of the so-called “labor shortage” helping to create the economic conditions where the grocery workers had greater bargaining power than usual. Jalyn, a King Soopers worker since 2018, told Liberation News, “If just one of us spoke out, not much would happen. But right now we recognize that we have leverage. We can say we want better. Give it two, three, four days, and they will recognize that they can’t do anything without us.”

The wage increases that King Soopers workers’ collective action won them will make a difference for thousands of working-class families in Colorado. The success of the strike is important not just for the workers at King Soopers, but it also sets a standard for grocery store workers across the country. Both Albertson and Safeway contracts are up in Colorado now, and this victory for grocery workers in the Denver area serves as a major boost for retail workers organizing nationwide. 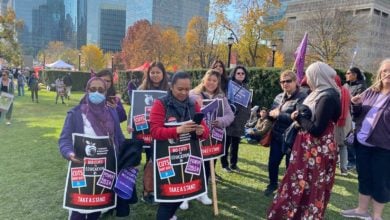