The struggle for LGBTQ liberation unites the working class! 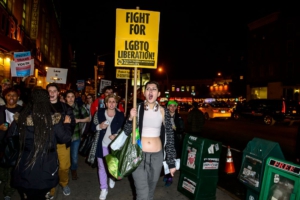 As the Trump administration, major parts of the ruling class and even those at the heights of the Democratic party attempt to institute a new era of unfettered capitalism and as the Trump regime attacks LGBTQ people, Muslims, immigrants, women, workers and all oppressed people, we salute the heroism of the LGBTQ community and the community’s leadership of the people’s struggle during decades of defeats and setbacks for most sectors of the working class.

It is truly remarkable to think that in the past few decades when we have witnessed the rise and institutionalization of mass incarceration and mass deportation–when we have witnessed wave after wave of attacks against women’s rights, labor rights and public education and the continuation of widespread violence against LGBTQ people–that the LGBTQ movement has been able to swim against such a reactionary tide, a tide that includes a grave escalation of murderous imperialist wars for domination, and win important rights, like marriage rights–rights that would have been unimaginable just a short time ago.

Marriage rights, specifically, have been a huge life and death step forward for millions of poor and working class people who have won hundreds of legal and economic rights as a result of having marriage rights.

The rise of the LGBTQ movement is truly a beacon of hope for all working class people and has helped lay the objective basis for a truly revolutionary movement to emerge in the United States. We in the PSL believe that no movement for socialism in the United States will be successful unless it is led by all parts of the working class, especially by the most oppressed. Only a movement that fights to smash the patriarchy and unites around the full and total liberation of the LGBTQ community will be successful.

We must be be clear headed about the fact that there is much work to do. We must acknowledge the central importance trans and queer people play in the struggle for socialism and liberation. Trans people, especially trans people of color, face the most extreme forms of oppression in this society. Trans people face employment discrimination, housing discrimination, widespread violence and sexual violence, lynchings and police brutality on a level much higher than most people.

Despite all the difficulties, in recent years, the trans movement, through struggle, has been gaining strength. According to polls, 75 percent of people in the United States believe we should have a federal law banning discrimination against trans people and a majority of people believe people should be able to use the bathroom of their choosing. Of course, anti-trans sentiment and violence is still widely accepted, protected at the highest levels of government and hardly ever punished. But the trans struggle is clearly on the rise and has growing mass support among young people. For example, on March 3, on a bitterly cold night in Chicago, a historic demonstration of over 2,000 trans people and their allies took over the downtown streets to demand Trans Liberation Now!

Despite the very real dangers of the current period, LGBTQ people will be victorious. Marriage rights were won because the movement continued–despite massive pressure applied by the Obama administration for the movement to be passive and patient–to fight in the streets. The movement remained independent of the establishment parties and won.

Ultimately, we believe that capitalist society cannot be reformed. No poor or oppressed person can truly be free in a society in which a few people on top exploit the labor of the many for their own benefit. Class society created oppression against LGBTQ, queer and gender nonconforming people. It created racism and sexism. Only the defeat of class rule will lead to the liberation of LGBTQ people and in the struggle for socialism, a system of rational planning for people’s need, cooperation and equality, it will be LGBTQ people, women, people of color, immigrants and all workers leading the way to victory.

Women, LGBTQ people, immigrants and all workers unite to smash the patriarchy and help organize a society based on the liberation of all oppressed people.