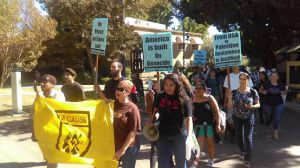 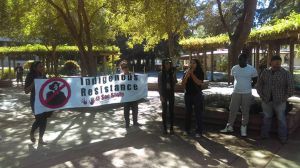 October 12 marked what has long been called Columbus Day by many. However, history has made clear that there is nothing in the legacy of Columbus to be celebrated. The mass death, rape, and forced conversions carried out by the colonizers following his landing cannot begin to be described by the word genocide.

Despite the Native population being decimated by countless massacres including acts of biological warfare, the Indigenous people of the Americas continued to resist constant attempts to wipe their culture off the map. In honor of this struggle against the forces of colonization that continue to be a threat, students and community members met in the quad of Sacramento State University.

It was at this university that Chitaanibah Johnson asserted the validity of the Native American claim to have been the victims
of genocide by the United States government. She supported her stance with numerous pieces of historical evidence and was still told that she was wrong: it was not genocide. She was then thrown out of her class by the professor who has since then asserted his right to “academic freedom.” She went on to be one among a number of Native students and community members to receive death threats. The University has yet to investigate any of these death threats despite numerous demands they do so.

The University administration has done little to resolve the issue and many students have expressed their discontent with their handling of the situation. As it stands now, there has been no official statement by either the administration or the professor despite nearly a month having gone by. The professor, Maury Wiseman, has not been allowed to speak on the issue by administration. Instead of offering substantive responses to student demands for accountability, they have given half measures and
symbolic gestures. The President, Robert Nelson, has offered to increase funding to the various student centers on campus while at the same time saying that:

From their actions and statements, the administration has shown their misunderstanding of the significance of the incident at hand. This was in no way an isolated incident; it was reflective of a systematic problem with the structure of University education. The real issue at hand is the inequality between student and professor and the inability of students to question dominant historical narratives. There needs to be a recognition that professors have things to learn from the students just as the students have things to learn from the professors. While the administration has been less than receptive to this message, there have been sympathetic faculty from the CFA who have stood in solidarity with the students in their calls for department wide recognition of American genocide and classroom equality. It is this unity between students and faculty that is vital in the struggle to gain equality on campus and provide a quality education capable of fostering critical discussion.

The students of Sacramento State University as well as the Indigenous community of Sacramento stood together in opposition to the white washing of history and refused to be idle in the face of Eurocentric historical narratives that encourage the ongoing subjugation of Native peoples. There was a speak out in the quad to let it be known that Columbus was not a hero and Indigenous resistance will not stop until there is an end to oppression in all its forms.

Students for Quality Education along with groups such as the Party for Socialism and Liberation, Socialist Organizer, and the Brown Berets tabled and did outreach to the student community while others stopped and listened to the several speakers nearby. Included were various elders of the Native community, Chitaanibah Johnson and several other students. All agreed on the need for further action to combat the systematic oprression faced on and off campus.

There was then a march to deliver the student’s demands to the University President. Marching with signs and chanting with a bullhorn, the march drew the attention of all who passed and the messages were clear: “When Indigenous rights are under attack, what do we do? Stand up, fight back!” and “The students united will never be divided!” As three students went into the heavily guarded Sacramento Hall Administration building, the chants could be heard loud and clear from outside. The demands delivered were:

2. Sacramento State shall recognize its fault and failure to act appropriately in addressing this classroom incident.

3. A full and thorough investigation by Sacramento State of death threats made towards Native students in regards to the classroom
incident.

4. Sacramento State must be proactive and diligent in putting an end to the perpetuation of racist, Eurocentric ideologies at this institution.

5. Academic departments must develop or establish an agreed upon policy, code of ethics, or collective agreement to have historically accurate information as part of classroom curriculum

6. The University must establish and encourage a climate in which student marginalization is prevented in the classroom and where students have an equal voice to that of their faculty counterpart. Classroom grievance procedures should be accessible to all Sacramento State students.

7. To have an established and intentionally diverse student representation on the “Hornet Honor Code” committee put forth by President Nelson. Student representatives must be selected from diverse campus organizations and be inclusive of all identities.

8. To have an increase in funding to the Multi-Cultural Center, Women’s Resource Center, and PRIDE Center it should be determined collectively by the staff, student assistants, students who utilize the center, and center directors how the funds will be distributed.

9. Increase the funding to existing programs that focus and center on issues of diversity, inclusion, and marginalized communities. Funding should also be given to increase the physical space from where these programs operate.

10. Sacramento State must actively develop an institution wide training that holds all faculty accountable when issues of student marginalization and discrimination happen in the classroom.

11. Sacramento State must establish a University wide training that effectively and efficiently addresses issues of oppression in
the classroom. Training must focus on the intersection identities of Sacramento State students and ways in which micro aggression lead to a hostile campus climate

12. In the spirit of transparency and democracy, any policy change resulting from these demands must be presented to students for review and approval.

Following this, there was a march back and closing speeches. About half way through the final thoughts, an evangelical preacher got on a pedestal on the other side of the quad and began to “preach.” As members of the PSL and Brown Berets posed in front of him with signs reading “No Peace on Stolen Land” and “America Was Built n Genocide,” he began verbally attacking the group, saying that they were not children of God and that they were all destined for hell. The group decided to fight back and began to circle him while chanting “Genocide.” This led to heated exchanges that drew a large crowd of onlookers before shifting once again to speeches about the significance of Columbus and Genocide on the other side of the quad.

The day closed with a call to continue the struggle against white supremacist historical narratives and the structures that protect them.