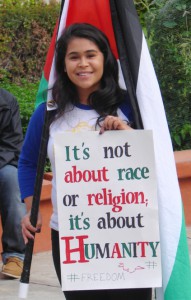 Some 35 members of Students for Justice in Palestine at San Jose State University and community supporters marched from the campus to City Hall on Nov. 21 to rally and present a list of demands to Mayor Chuck Reed.

A leader of the group, Abid El-miaari, pointed Liberation News to the following list of Israeli crimes motivating the protest: 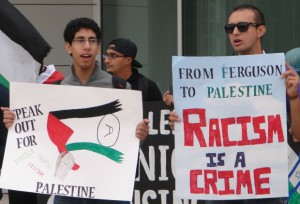 Spirited chanting echoed off campus buildings and along the march route. Chants included: “Free, free Palestine,” “From the river to the sea, Palestine will be free,” “Israel, Israel what do you say, how many kids did you kill today,” “Israel, Israel you can’t hide, we charge you with genocide,” “1, 2, 3, 4 occupation no more, 5, 6, 7, 8 Israel is a terrorist state,” and “From Ferguson to Palestine, racism is a crime.” 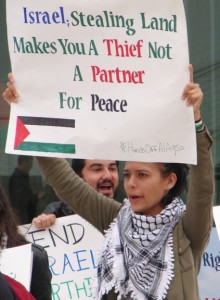 After arriving at City Hall, an SJP delegation, headed by El-miaari, went to the office of the mayor and handed in a list of demands. It began, “We, the Students for Justice in Palestine (SJP) and concerned community members, write to you today as citizens of America deeply troubled by the continuous violations of international law by Israel.” The statement concluded with, “WE DEMAND that our government stop its complicity with the violations of international law by ending U.S. military aid to Israel.”

Representatives of the groups participating in the action expressed their solidarity with the Palestinian struggle at the concluding rally.