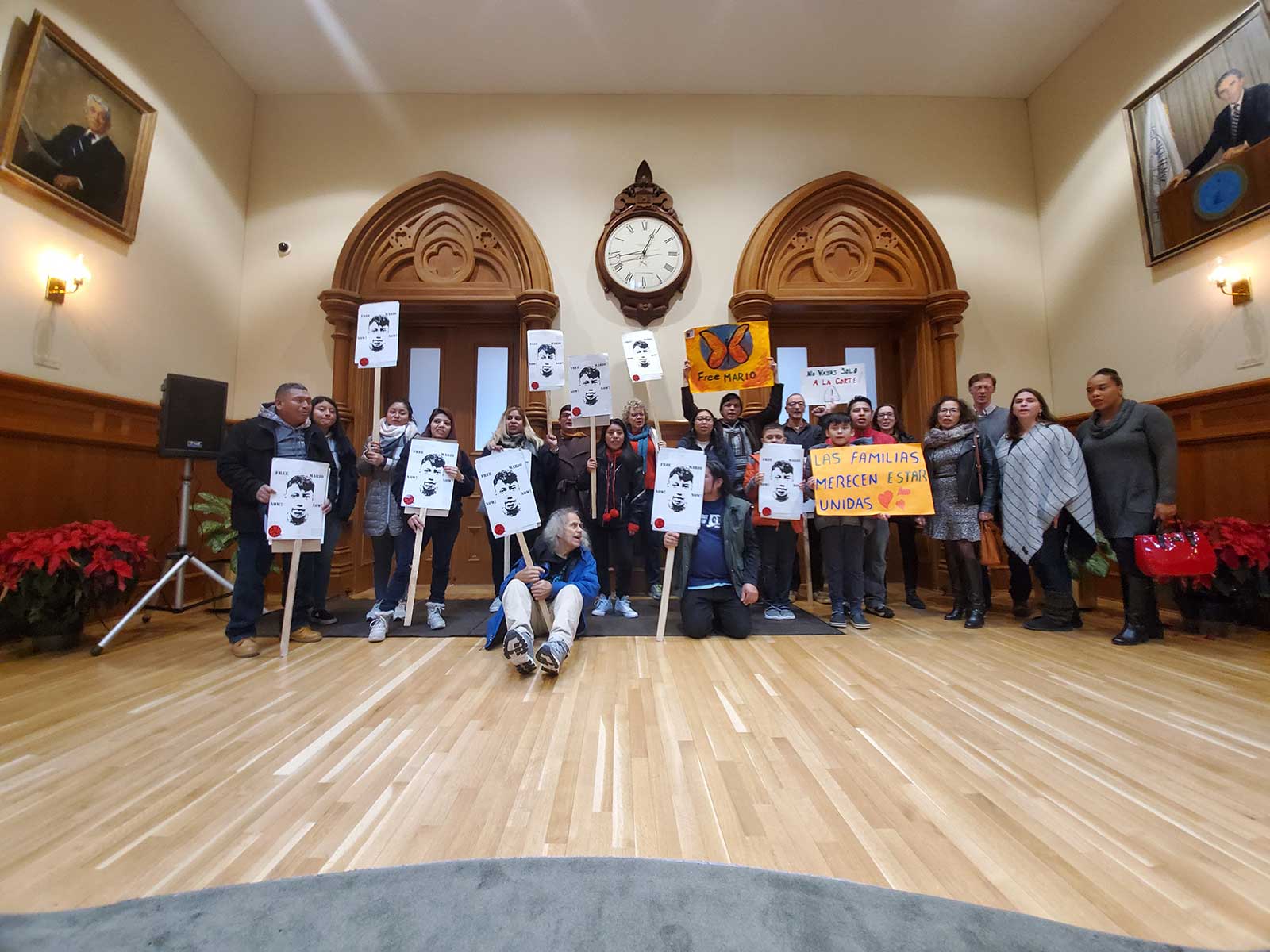 New Haven students, community members and educators closed out 2019 with a big victory: Mario Aguilar Castañon, an 18-year-old high school student, was granted asylum on December 30 and then released from an ICE detention facility on December 31 — in time to spend New Year’s Eve with friends and family.

Mario had been in the Bristol County detention center in Dartmouth, Massachusetts for over three months. Since his arrest and detention, students from Wilbur Cross High School have led the fight for his freedom. They held rallies, marches and press conferences in New Haven, and traveled to Boston to rally outside the court where Mario’s case was being heard. Though they were denied entry to the courthouse, the students chanted loudly enough that they were still heard inside. Community organizations including the Connecticut Bail Fund, Connecticut Students for a Dream, the Connecticut Immigrant Rights Alliance and Unidad Latina en Acción continue to support the struggle, along with attorneys from the New Haven Legal Aid Association. Teachers and administrators also played a role in the support system, writing letters to him and making calls to officials to keep track of what was happening. Some reported that when they tried to send Mario classwork so he could keep up with his studies, officials at Bristol denied him access.

An indigenous Mayan, Mario came to the United States from Guatemala in 2018 to seek asylum. He cited “fear of return” in his asylum case, afraid of the gang violence that targets him as both a young man and as an ethnically indigenous Mayan. The U.S. government’s intervention in Latin America over decades has played a significant part in creating the crisis in Guatemala and beyond, propping up and installing right-wing dictators using sanctions and war to destabilize countries that seek an independent economic path.

After learning on December 30 that Mario had been granted asylum, a press conference was called for December 31 to demand his release from ICE custody. Students and faculty from Wilbur Cross High School spoke, including Principal Edith Johnson: “It is a wonderful lesson in civics for all of our students to learn about our systems and even the broken parts of our system that need to be fixed. I know that this beautiful group of students I lead in that school will be a part of mending a broken system.”

Wilbur Cross student Anthony Barrosa told the crowd, “Without a community coming together, without a community making noise, many people have gone lost in the system and have been forgotten, and it’s a tragedy. People need to know that what the system is doing to us is dehumanizing us, it’s separating families and violating human rights.”

Within hours of the press conference, word quickly spread that an attorney who had gone to speak to Mario about his case was in fact bringing him home that day.

The struggle for Mario’s freedom is not over, and neither is the fight for immigrant rights overall. Connecticut activists continue to protest the presence of ICE officials in state and local courthouses, which is how Mario was arrested. Detaining people in courthouses in Connecticut is a direct violation of the TRUST Act that was recently fought for and won by community organizers from throughout the state. Regardless, the work of the Wilbur Cross students proved to them as well as the rest of the community that united struggle wins results.