The workers struck at least once before, in 2002. Having gone eight years without a raise in the face of skyrocketing rents, school tuition, and health care and other costs, and faced with a stonewalling and arrogant top management that has refused to hire staff to replace workers lost to attrition, these court clerks, family counselors, researchers, janitors and other workers decided, once again, enough is enough.

Yvette McKinney, a striking African American court clerk, told Liberation News: “It used to be that housing costs took around 30 percent of our income. Now it’s more like 50 or 60 percent. Apartments in this area are renting for $2,200 to $2,500 a month, which we can’t afford.”

The diverse work force—a large majority women, many of color—formed a new organization after decertifying from the Service Employees International Union previously representing them. They decided to call their new union “Santa Clara County Professional Employees Association,” or “SCCPEA” (pronounced “skippy”) for short.

At this point, according to strike leader Shelly Carey, secretary of the new union and member of the executive board, there is no paid staff. She told Liberation News that the union is in contact with court workers in other jurisdictions to discuss setting up a similar organization to represent their interests statewide. 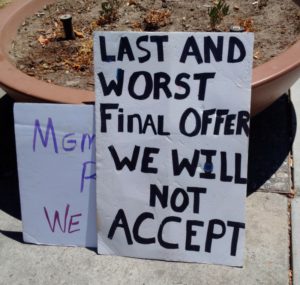 After coming up with a paltry offer of a 4.5 percent raise over two years, subsequently sweetened by an immediate 5 percent, but only for workers with six years’ seniority, clearly aimed at dividing the workers, the court administration has been stalling. The workers at one point agreed to the dispute being taken to mediation. But, according to the vice president of the new union, when their bargaining representatives showed up for the meeting, the mediator told them there was no new counter-proposal from the court. The workers might need to “show a little muscle,” he said, to bring the two sides closer—a clear suggestion that the employer was stonewalling.

Beginning Aug. 3, the workers have been showing more than a little muscle. The San José Mercury News reported Aug. 9: “The walkout has disrupted operations at all 11 courthouses, with all but essential hearings postponed. Court clerk’s offices at the Hall of Justice in San Jose and traffic court in Santa Clara were among the eight such offices that have been shuttered, with no services to the public.”

Without a strike fund, SCCPEA has been appealing for financial support by “crowd-funding.” As of this writing, almost $34,000 has been raised, though much more will be needed if the strike drags on, which now looks likely.

The court administration has moved to partly shut off these badly needed donations. According to the Mercury News:

“A supporter of the court administration claimed that lawyers who contribute are violating a State Bar rule that prohibits attorneys from contributing either directly or indirectly to a court employee. More than 100 local lawyers have made donations, including prosecutors and defense attorneys. …

“However, several attorneys who specialize in defending lawyers facing State Bar discipline said the rule does not apply to this situation.

”’I don’t believe it’s a violation because this is a donation to a labor association,” said Sam Bellicini, president of the Association of Discipline Defense Counsel. ‘Any intent to restrict donations from a lawyer could even be a violation of the attorney’s First Amendment rights.”’

So far, the South Bay AFL-CIO Labor Council has not sanctioned the strike, which means members of other unions can cross the picket line without censure. However, Carey reported, UPS Teamsters have not been delivering packages, and she hopes for active support from other unions as well as the Labor Council.

The court administration is again appealing to take the dispute to mediation: “Clearly, there is no path forward that does not include participation by a neutral third party,” a written statement issued by the court on Aug. 8 said.

Does this mean the court is now feeling the heat and is prepared to engage in serious negotiations? Strike leaders are dubious. They point out that the mediation process would take at least 16 days while the strike is halted, and so this could merely be another stalling tactic. Besides, SCCPEA’s current offer, if accepted, would involve a very justifiable 3 percent additional wage increase during the second year of the two-year contract.

It is quite likely that the real aim of the court, and the local anti-labor forces standing behind it, is to break this new militant workers’ organization and leave the workers with no organization of their own at all. For that reason, and because their struggle is just, these workers deserve the widest possible support.