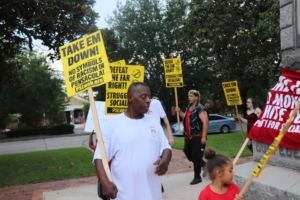 On Friday, June 15, two dozen protesters convened at Lee Square in Pensacola, Florida to call for the removal of the 50-foot Confederate monument erected there. Demonstrators marched around the statue, chanting “they say ‘Jim Crow’, we say ‘hell no!’” and “hey hey, ho ho, this racist statue’s got to go!” While several people driving by expressed support, others heckled and shouted at protesters. One shouted the tired slogan “heritage not hate!”, but immediately abandoned all pretense by following up with the hateful catchphrase “white power!”

Lee Square, once known as Florida Square, is prominently situated in downtown Pensacola, just blocks from the bustling entertainment district on Palafox street. Protester Cherilyn Sumer pointed out that the looming monument overlooks Martin Luther King Jr. Plaza, stating, “It’s built on top of the hill, looking down. That’s Martin Luther King Plaza down there. It’s not even half the thing this is though, it’s just a bust of Martin Luther King and then [the Confederate monument] has an obelisk, several sayings, a whole statue.” The symbolism is hard to miss. “We need to stop glorifying racism and start celebrating people of color,” Sumer added. 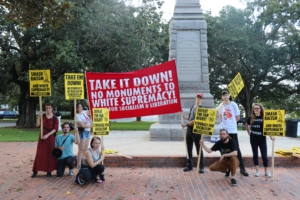 The monument was erected as part of a larger effort by the Confederate-sympathizing Southern Democrats to regain control of the South and reassert white supremacy as the law of the land in the years following Reconstruction. Like most public symbols of the Confederacy, the monument at Lee Square was built during the Jim Crow period to remind Black Southerners of their place in the white supremacist social hierarchy. As demonstrator and local resident Jerry Lewis stated, “I love history, I love Civil War history… I travel a lot and I see them and I like reading the history but what they’ve been used for is a poke in the eye to Black people. And that’s not right.”

Confederate monuments were also used to promote a whitewashed understanding of the Civil War, one that reimagines the war as a romantic fight for States’ rights and the preservation of Southern pride rather than a conflict driven by blatant racism and the brutal class domination of the white capitalist class over the enslaved Black population. This revisionist version of the Civil War enables white supremacists to conceal their racism and obfuscate their stances, hiding behind claims of heritage and pride while providing a culture of support for institutionalized racism. 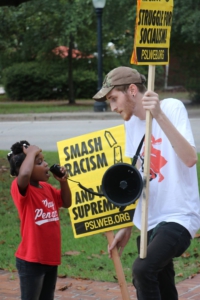 This protest, called by the panhandle chapter of the Party for Socialism and Liberation, is only the most recent effort by the people of Pensacola to demand the removal of the Confederate monument from publicly maintained spaces. The previous protest, organized by revolutionary leftists and Black activists in Pensacola, came right on the heels of the infamous Charlottesville rally. Hundreds of protesters gathered to call for the monument’s removal, and tensions ran high as pro-Confederacy groups rallying to defend the monument shouted at children and threatened violence against the demonstrators. However, by the end of the day, the neo-Confederate crowd had dwindled and the momentum was decidedly with the people.

In response to the national and local outcry against monuments to white supremacy, Pensacola mayor Ashton Hayward initially voiced support for the removal of the monument, but has since walked back his stance, stating that “this is not a decision that is mine to make unilaterally.” However, activists in Pensacola are not going to let this issue be swept under the rug. When asked what he would like to see from this movement going forward, local resident Richard Burns said he’d like to “make some more noise, let people hear that we don’t like these statues and they need to go.” 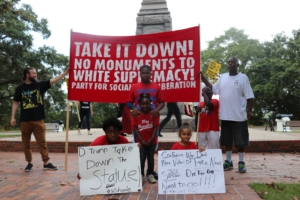 Here in America, we have seen over and over again how racism allows Black and brown lives to be devalued and devoured by the capitalist system, from Jim Crow laws to discriminatory lending and hiring policies to privatized prisons and mass incarceration. In Pensacola right now, people of color are being pushed from their historic neighborhoods for the benefit of the white, wealthy gentrifying class. The same system that allows for a 50-foot-tall Confederate monument to loom large over a bust of Dr. Martin Luther King, Jr. is the one that incentivizes displacing people from their homes. Racism is fundamental and endemic to the capitalist system, but the people in Pensacola have had enough and are fighting back.