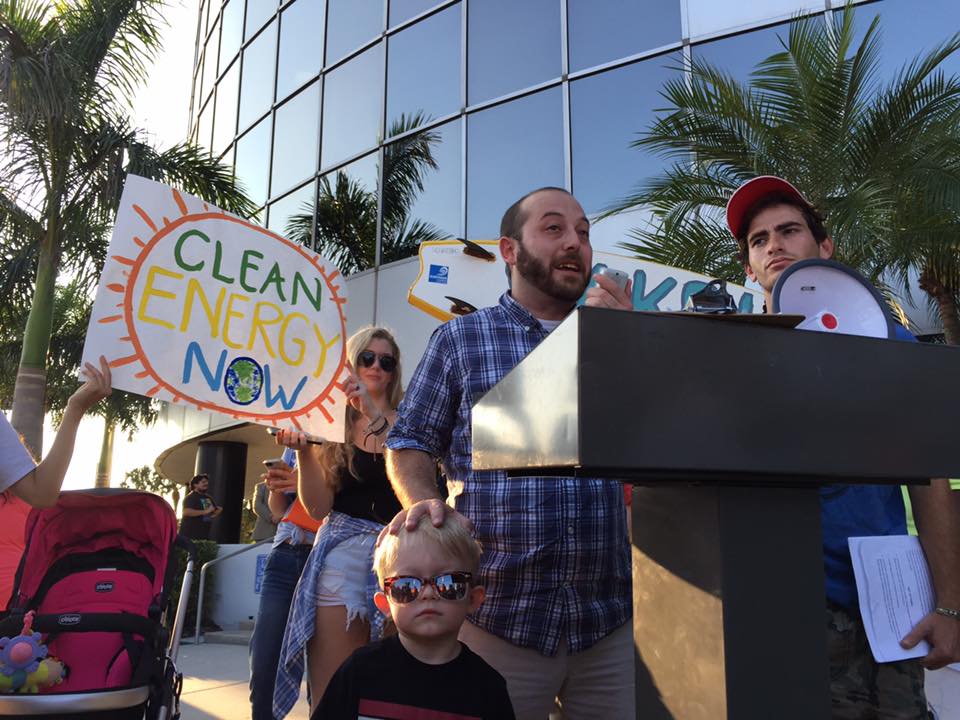 On October 14, Tampa Bay joined 135 cities across the country in the People’s Climate Movement day of action. Labor unions, immigrants, students and faith groups came together to demand action on climate change and to link local action to global action ahead of the Paris climate talks this December.

The day marked one year since the historic People’s Climate March, where 400,000 people took to the streets of New York City for environmental justice and action on climate change. Around the world, climate change is already increasing heat-related deaths and illnesses, inflicting economic damage, and making storms and droughts more frequent and severe, to name a few of its effects.

The rally marched to Sen. Marco Rubio’s Tampa office to correct him on his dangerous climate change denial, urging him to take action to protect the state. People at the rally wore life vests and pool floaties to highlight the threat rising sea levels pose to Florida. One man carried over his head a surf board painted with the words “WAKE UP”.

“Climate change and the threats to Tampa Bay and the whole Tampa Bay area are real but we also have solutions,” said Jennifer Rubiello, the director of Environment Florida. “Solutions include everything from solar powered cars to zero energy homes to a massive increase in public transit. The big picture is we need to move away from dirty fossil fuels and towards cleaner sources of energy like solar.

“We are calling on Senator Rubio to join the fight and take immediate and responsive action to address climate change. That includes limiting dirty carbon emissions from power plants, which are actually the single largest contributor to global warming and pollution,” said Rubiello.

Sen. Rubio has called for expanding offshore oil and gas drilling and for reversing limits on greenhouse gas emissions. He also supports hydraulic fracking, a process which releases natural gas in rock formations while contaminating water supplies and the atmosphere.

Sen. Rubio’s climate denial reflects that of the same corporate interests backing his rise on the national political stage. Major corporations, especially in the energy sector, invest heavily in lobbying and PR campaigns to deny climate change, in order to avoid regulations and competition from renewable energy. Independent studies by groups such as InfluenceMap show how corporate influence is a key reason for the relatively slow progress on national-level climate legislation and United Nations climate change conferences.

Tim Heberlein, organizing representative for Sierra Club’s Beyond Coal campaign, emphasized the need to move away from fossil fuels pushed by the major corporations.

“Carbon pollution is the number one contributor to climate change. We have two main producers of carbon pollution: one is in our tail pipes, and the second is in our power production. The biggest culprit is coal. We’ve actually retired over 202 coal plants, one about every ten days, in the United States and we’re looking to move the U.S. entirely off coal by 2050,” said Heberlein.

Liberation News also spoke with Juliana Musheyev, a New College of Florida graduate who recently attended the Climate Reality Project conference held in Miami. Musheyev uses her time outside of work to advocate for the Floridians for Solar Choice ballot initiative, which aims to remove the barriers to solar energy put in place by Koch-backed energy monopolies in Florida.

“The time to reverse the effects of climate change passed a long time ago. So we are mitigating—trying not to let it become completely
catastrophic—and we’re adapting. In Miami Beach, for instance, they’ve raised a lot of the streets about five feet. And they’ve installed water pumps, because there’s flooding in the streets,” said Musheyev.

“It’s crazy the stuff that’s happening right now—the occurrence of more droughts, one-in-a thousand-year floods, political instability that’s caused by climate change, what’s happening to our oceans…Sometimes it’s hard to handle,” said Musheyev. “But if we take action, if we use our voices, if we understand that we have solutions and we just need to put pressure on our legislators to use those solutions, and fight against the wealthy class that’s trying to maintain its monopoly on energy, then I think the future looks okay.”