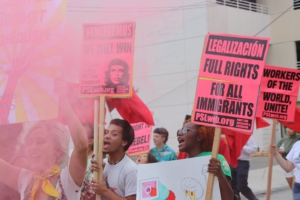 On Tuesday, workers and activists from several Florida cities gathered in Tampa to observe International Workers’ Day 2018, and marched en masse to demand an end to oppressive immigration policies, the degradation of working people’s rights, and police brutality. Workers from a large variety of activist organizations and tendencies united in this march against capitalist exploitation.

The event began with a gathering at Curtis Hixon Waterfront Park, where a number of speakers, including representatives from the Party for Socialism and Liberation, rallied the people to stand up against racism, classism, and imperialism. Several activist organizations stood together in solidarity to stand up for the rights of working people, including the Democratic Socialists of America, the Bay Area Dream Defenders, the Sex Worker Solidarity Network, the Industrial Workers of the World, and the Florida Immigrant Coalition. Once the crowd was ready, they began to march through Tampa. Cries of “Stand up, fight back,” and “No justice, no peace! No racist police!” echoed through the streets as the marchers banded together to stand up for working people’s rights. Fascists and other reactionaries tried and failed to disrupt the march, but the working people, united in strength and solidarity, marched from the park into the heart of Ybor City to let it be known that they will not accept oppression and exploitation.

Ruth Beltran of the Florida branch of the PSL spoke during a break in the march, calling for the united workers “to celebrate International Workers Day” and “to demand an end to capitalism, to demand an end to exploitation.” Chants of “We work, we sweat, put fifteen on our checks!” could be heard throughout Ybor City. The workers on the clock in Ybor observed the march and stood in solidarity, cheering on as the marchers rallied to promote working class unity and an end to the capitalist system.

The march resumed and concluded at Centennial Park, where Beltran rallied the workers in a speech denouncing capitalism: “They say that we live in a democracy, but in a sense, we live in a dictatorship. The people who employ us and pay us our wages, the top one percent, are dictators,” she said, calling for the workers, who vastly outnumber the capitalist elite, to “organize, fight back, and win.” 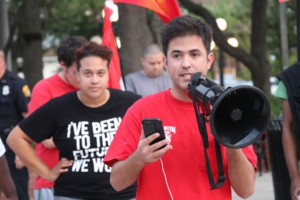 In addition, Justin Garcia of the Tampa DSA spoke against police brutality, the horrific treatment of Puerto Rico by the United States, and “our permanent enemies, the capitalists.” He called on members of the crowd to speak out against capitalism and list the myriad ways in which it has injured them and the global working class.

The march could not have been possible without the energy and passion of host Ashley Green of the Dream Defenders, who introduced speakers, led the workers in mass chants, and motivated the crowd to maintain its devotion to the liberation of working people across the Earth. The global capitalist elite concentrate more and more wealth in their hands while working people across the world starve and struggle to survive, and the United States government wages war on the the international and domestic proletariat. Conditions are only getting worse; the Party for Socialism and Liberation fervently believes that the international workers of the world must unite in a class-conscious worldwide mass movement led by an organized revolutionary vanguard to end this oppressive and destructive system.

Only a socialist society built on the principles of equality and liberation for all can serve the needs of the masses of working people and stop the destruction of our planet. End racist deportations and police brutality! End capitalist oppression! The struggle of the workers has no borders!