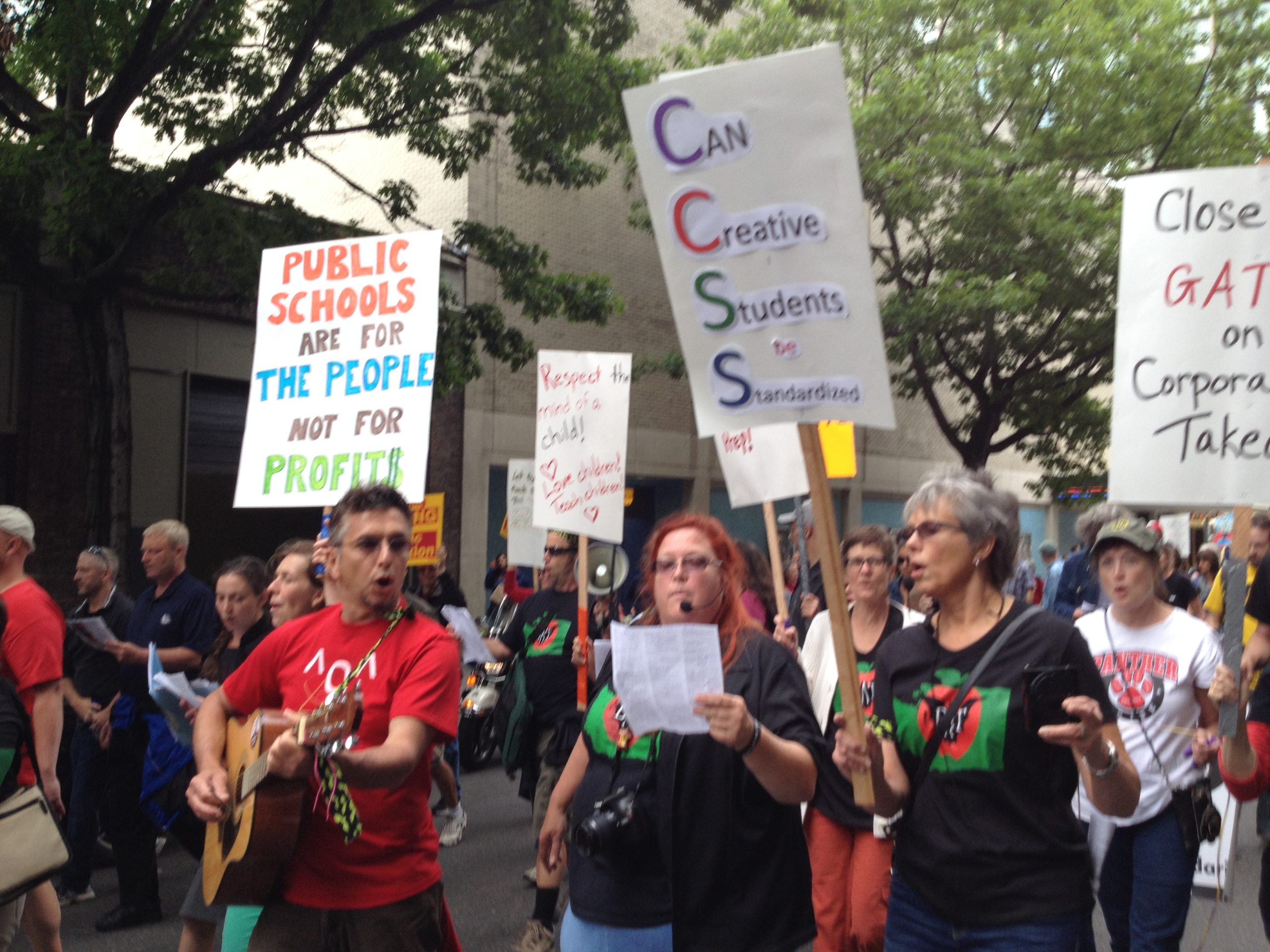 Singing Solidarity Forever on the march to the Gates Foundation

Hundreds of “Bad Ass Teachers” descended upon the Bill and Melinda Gates Foundation June 26 in Seattle. The Gates Foundation is notorious as one of the corporate backers of the pro-capitalist education “reform” drive based on standardized testing, the vilification of teachers and the move to privatize public schools.

Liberation News spoke with marchers to find out what motivated them to come out on the streets and protest the Gates Foundation.

Lise Spangenthale, a teacher from Arizona visiting family in Seattle joined the march because the Gates Foundation “has influence like an octopus, spreading out all over. Arizona is a hotbed of charter schools and standardized testing. My salary is tied to test scores.”

Kandis West, accompanied by her daughter Peja West, recently moved to Seattle from Oklahoma City, where Peja attended a high-poverty school. Kandis became concerned about the emphasis on high-stakes testing and the danger that kids would be automatically held back in 3rd grade if they didn’t pass. “Where it’s coming,from, to save minority children, I agree with that, but the testing is having the opposite effect. Nearly 50% of Black men don’t  graduate from high school. I am opposed to all this standardized testing.” Kandis was circulating an initiative petition for lower class sizes.

Marcia Leister traveled from Bellingham, Washington to attend the protest. A teacher at Bellingham Technical College, she is particularly concerned about the role of Pearson, a publishing and testing company, which recently purchased the GED test. The test has been made much more difficulty for students to pass. In looking for others who are concerned about the GED, she found the organizers of today’s action and decided to  join forces with them for educational fairness.

Signalling the new militant teachers’ movement pro-union sympathies and affinity for social justice, a talented team of teacher/musicians led the marchers in singing Solidarity Forever, If I Had a Hammer, as well as special “education” versions of movement classics like Which Side Are You On and I Ain’t Gonna Teach to the Test No More (to the tune of I Aint Gonna Study War No More).

At the Gates Foundation, protesters held a short rally with more music, a flash mob and several speakers. Susan Dufresne, local teacher and co-author of “Teachers’ Letters to Bill and Melinda Gates” crossed over the barrier that had been erected to keep protesters off the Gates Foundation private plaza to give the letters to a representative of the foundation as burly security guards looked on.

The rally ended with an invitation to all, teachers, parents and students to get involved in the movement against corporate educational “reform.”