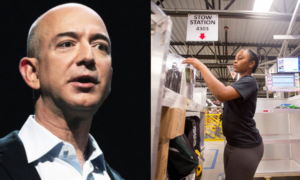 Amazon, the multi-billion dollar tech company founded by Jeff Bezos, has a long history of abuse of its employees. Guided by the plutocratic hand of their chief, Amazon executives routinely quash worker-led efforts to improve conditions in the workplace and achieve a living wage.

Under our current economic system, capitalism, workers that sell their labor power on the market are treated as a disposable means to create further profit for the owners. Just like machinery and raw materials, the bosses see us as interchangeable producers of value. Amazon takes this capitalist logic to its extreme with its dehumanization of workers in a way that is remarkable for an already brutally exploitative system.

Of 105 executives, 78 are white males and 20 are white women — i.e., 93 percent of Amazon executives are white. Next comes Amazon’s first or middle managers. In this group, 51 percent are white males. Below the managers on the pecking order lies the professional bracket made up of 38 percent white males and 29 percent Asian males. Women make up only 21 percent of managers and 26 percent of professionals, reflecting generalized trends across the technology sector, which has long been censured for its lack of diversity.

The numbers become even more telling when we look at how Black and Latino workers are represented. We see that 19,411 of the 22,794 Latino workers at Amazon do manual labor in Amazon’s warehouses; that is 85 percent of the total number of Latino workers at Amazon. The percentages are similar for Black workers. Of Amazon’s 37,463 Black workers, 33,379 work in the warehouses. This represents 89 percent of total Black workers. The class lines in the United States often mirror those of race. Amazon is no different with a whitewashed corporate headquarters and racially diverse underpaid warehouse workforce.

Jobs in the warehouses are notorious for their draconian discipline measures, unsafe conditions and poor pay and hours. Jeff Bezos has gone on record as claiming that unions, which protect workers from abuse by their employers, are unnecessary while stressing that in a company like Amazon an open door is needed between management and employees. In his words, flexibility is key to keeping Amazon running. “Flexibility” in this case means firing workers with little warning and hiring many precarious positions during peak shipping season.

Part and parcel of working at Amazon is intense scrutiny of every aspect of the workday. Marxists have long known that the amount of surplus value extracted from labor power can be increased in a number of different ways. One: the workday can be lengthened leading to an increase in what’s called absolute surplus value produced. Two: the capitalist can invest in a new technology making each hour of labor that the worker performs more productive. Three: the capitalist, through cajoling and threatening, can increase the intensity of the work being performed.

It is this final tactic that is the preferred method of the capitalist behind Amazon, Jeff Bezos. By carefully watching every second of the workday, from the time a worker clocks in to when they clock out, Bezos and Amazon are able to amass an enormous amount of data regarding how hard each individual works. This “big data” is eventually used against labor as management culls those who don’t work as hard as their neighbor during weekly progress reports. This frenetic pace of work is directed for the benefit of Bezos and other executives.

Amazon also engages in attempts to divide workers by pitting them against one another, a longstanding tactic of the bosses who foster fierce competition between fulltime Amazon workers and contract workers who receive lower wages and fewer benefits. Lured by the prospect of a fulltime job, contractors like Integrity Staffing Solutions bring on more workers during peak shipping seasons like Christmas only to let the vast majority go when they are no longer needed. These workers are given no severance and have little to show for their time at Amazon. In fact, most do not deal directly with Amazon, but with Integrity, who does much of the dirty work of firing so that Amazon can keep its hands clean.

Even with that said, the attrition rate among fulltime Amazon employees is high as well. Amazon’s warehouses are often poorly heated or overheated, with many workers complaining of fainting from heat exhaustion and overwork. It is not uncommon for warehouse employees to tell of sorely crawling into bed after getting off the job, just hoping that they will have the strength to pull their broken bodies to work in the morning. They state that taking a sick day is tantamount to a death sentence at Amazon.

Bezos’ opinions on unionization are commensurate with his actions and opinions on the nature of business in general. A self-described “libertarian,” Jeff Bezos cultivates a culture of vindictiveness not only in the warehouse, but even in the white-collar work environment of the Amazon offices. It is there that workers are encouraged to rip apart each other’s ideas, clandestinely report on their coworkers to their bosses, and work from home on the weekends, all the while enduring round-the-clock surveillance of their work practices and the attendant weekly performance exams that constitute life in the warehouses.

Bezos takes personal pride in cultivating this atmosphere of terror and dysfunction. Speaking at a Business Insider conference, Bezos explained, “My main job today: I work hard at helping to maintain the culture.” If that is the kind of culture Bezos wants to maintain, then we do not want it coming to our cities.

Bezos has already been well-compensated for his efforts to keep down the working class. His net worth is currently estimated at $93.9 billion making him the richest person in the world. It would take an Amazon warehouse worker, making the average wage of $13/hr, more than 3,600 years to earn that much money. There can be no justification for a single CEO to own as much wealth as generations of working families. This is why, Bezos has shown himself to be an enemy of the working class, who parasitically profits off the immiseration of thousands of working people.

No to the Amazon HQ! No to the dictatorship of capital! No to inhumane working conditions!