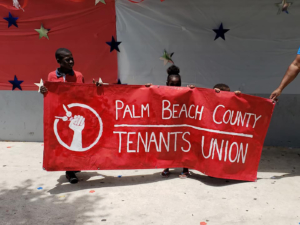 Slumlords in America have never stopped hurting the lives of the working class tenants they reign over. Stonybrook apartments in Riviera Beach, Florida is no exception.

For years, the Stonybrook apartments have suffered from neglect and deplorable conditions at the hands of Millenia Housing Management. Cases of black mold causing infants to be sent to the hospital, respiratory diseases, faulty wiring leading to a fire, and other examples of criminal neglect have all been found in Stonybrook with little to no action from the slumlords.

Millenia does little more than spray bleach and throw mulch over the surfaces of the apartment complex as tenants slowly die. This has caused outrage within Stonybrook and beyond.

The Palm Beach County Tenants Union is fighting to hold Millenia accountable for the neglect occurring in Stonybrook with support from tenants, organizers, and the community at-large. Those who take up the cause of fighting these slumlords have been met with retaliation, such as one tenant organizer’s car being vandalized in response to her work with the union.

On September 5, Tenant Union members and activists from around the community packed into Riviera Beach City Hall to protest and denounce a site plan Millenia pushed that would mean negative consequences for the tenants of the apartment complex.

After pointing out that logistics were faulty and that the site plan was devious and would leave tenants homeless, the city council still voted in favor of the slumlords four to one, with only one member of Riviera Beach City Council willing to fight for working class people.

As the fight for housing justice continues, members of the community continue to build the movement to stop these slumlords in their tracks!