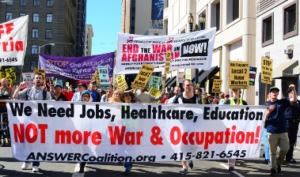 This is part three of a three-part series on the Afghanistan Papers. Read part 1 here and part 2 here

In December 2019, amid the din of impeachment, and with the United States in peace talks with the Taliban, The Washington Post released a six-part series of internal government reports titled “The Afghanistan Papers: A Secret History of the War.” It is an exposé revealing persistent lies to the public regarding the conflict (Part I), unfocused and ever-shifting strategies (Part II), the failure to “nation-build” in Afghanistan despite vast monetary expenditures (Part III), rampant corruption in the country (Part IV), the inability for U.S. and aligned forces to train their Afghan security force replacements (Part V), and the explosion of the opium industry since the beginning of the war (Part VI).

With the exception of the more than century-long wars against Indigenous peoples, the Afghanistan War is the United States’ lengthiest armed conflict (in excess of 18 years, so far). The war, like the other Post-9/11 conflicts in Iraq, Syria, Libya and Yemen, has differed from many previous conflicts in that, after so many years, it barely occupies a place in the discourse and consciousness in the United States. While the selling of and opening salvos of these conflicts enjoyed robust media coverage and outbursts of jingoism, the profound lack of expected buy-in from the general public has pushed the wars to the back pages of newspapers and rarely are discussed on 24-hour news outlets.

According to The Washington Post, the report originates from “a confidential trove of government documents … generated by a federal project examining the root failures of the longest armed conflict in U.S. history. They include more than 2,000 pages of previously unpublished notes of interviews with people who played a direct role in the war, from generals and diplomats to aid workers and Afghan officials … The Post won release of the documents under the Freedom of Information Act after a three-year legal battle.” The documents themselves largely come from an internal review by the Office of the Special Inspector General for Afghanistan Reconstruction (SIGAR), later released as a “Lessons Learned” report by the agency.

Participants in this review spoke freely on the assumption that their names and comments would never be published publicly. The series name hearkens back to the “Pentagon Papers,” a 1971 New York Times report which similarly exposed government lies and manipulations with regard to the Vietnam War.

Almost one trillion dollars later, as they negotiate something akin to “peace” with the Taliban, perhaps the United States will finally pull their forces out, leaving the trauma and wreckage in the rear-view mirror for the Afghan people to rebuild. But will there actually be any “lessons learned” or will they just point the wrecking ball in another direction? Again, veteran Ryan Keen tells Liberation: “I think this will, sadly, just be a footnote and nothing will change with U.S. imperialism. Both home and abroad. And it will keep ramping up until it collapses or there is a revolution.”

Crucially, “The Afghanistan Papers” largely lets two major players off the hook, which work hand in hand to ensure the American Empire remains in a state of perpetual war: defense contractors and the mainstream media.

Today’s military industrial complex features more war profiteers and greater profit for defense contractors than ever before. Their boards of directors include countless ex-military and governmental officials with high-level connections pushing belligerent and aggressive foreign policies for profit. Anti-war veteran Ryan Keen told Liberation News: “The bottom line to me is, whether it’s the Afghanistan Papers, or the Pentagon Papers, or Smedley Butler’s “War is a Racket” all of these prove that U.S. imperialism is driven by hyper-capitalism, the exploitation of Black and Brown communities all over the globe for resources and for military industrial complex profits.”

Meanwhile, corporate media functions to serve the military industrial complex. It is common to see ex-military officers featured as “national security experts” on 24-hour news channels or in the pages of the New York Times or The Washington Post spouting the same rhetoric that perpetuates these “forever wars.” The author of “The Afghanistan Papers” report, Craig Whitlock, can be proud of the work that he and his team have done to uncover and report on this important trove of documents. However, it is doubtful that The Washington Post will change its tune the next time government and military officials are pushing for war.

“The Post was one of the papers that was cheerleading the wars abroad, pretty much as the stenographers of the state department,” remarked anti-war veteran Jovanni Reyes. He added, the report is “something you would see in MintPress, or Gray Zone for example, alternative media. But, being a major media outlet, The Washington Post, owned by one of the wealthiest people in the world, Jeff Bezos, who has contracts with the state department, CIA, I was wondering, is there a motive behind it?”