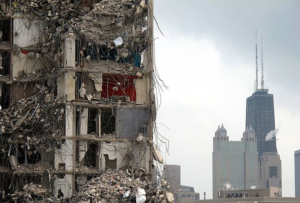 As Mayor Emanuel and the Chicago ruling class make a bid for a new Amazon HQ that will be filled with thousands of corporate managers—a bid that will have to come close to New Jersey’s promised $7 billion in corporate welfare to one of the world’s wealthiest companies—we must understand how Chicago, like San Francisco and Seattle, is already systematically being made into a city for the rich and white only. An Amazon HQ would escalate gentrification and the war on Black, Brown and working-class communities—a war which is already well underway.

On Oct. 4, business magazine Crain’s reported that recent census department data showed that Chicago was the best educated major city in America. The midwestern city had surpassed New York and Los Angeles to have proportionally the most residents with bachelor and postgraduate degrees. Unfortunately, this achievement is a result of policies that have driven working-class people, especially Black families, out of the city. Chicago under Mayor Rahm Emanuel has ruthlessly targeted minority neighborhoods for austerity, while giving out money to firms that employ privileged workforces.

According to the American Community Survey run by the US Census Bureau, the non-Hispanic Black population of Chicago has dropped from 909,842 in 2010 to 840,208 in 2015. This is a loss of almost 70,000 Black residents at a time when the city as a whole was growing. In the same five year period, Chicago’s total population grew modestly adding 14,000 new residents. The loss of Black residents is therefore not a result of a general trend of depopulation in Chicago. Chicago’s Black population is falling as the city as a whole is growing.

The exodus of Black residents from Chicago can only make sense in the context of systemic underdevelopment and the militarized policing of Chicago’s Black population. In 2013, 47 schools were closed by the Emanuel administration, which closed schools in mostly Black neighborhoods. At the time Chicago Public Schools had a total Black student population of 39 percent, while the schools targeted for closing had an 88 percent Black population. These schools were centers of communities, and their closure destroyed that and made life even harder for thousands of Black families.

Other city and state cuts to essential programs like mental health clinics and violence interrupters, people who intervene in personal and gang conflicts before they escalate, have led directly to increases in community violence. Adding to the violence is the notorious Chicago Police Department, with a history of racist torture and murder so evident even the U.S. Justice Department found that it had a pattern of engaging in unconstitutional use of deadly force.

While the Latino community in Chicago has not had a dramatic fall, they are also struggling against city policies in their neighborhoods. The historically Mexican community of Pilsen has lost over 10,000 Latino residents in the past 20 years, while richer, mostly white, professionals  have moved in. The number of families in the neighborhood has dropped as working class families can no longer afford home prices or rents.

As these residents in these neighborhoods have struggled, the wealthiest areas of the city, like the Loop, have boomed. Crain’s reports that over 40,000 people have moved into this exclusive neighborhood in the past ten years. This influx is fueling a building boom with new construction in the city center. This building is subsidized by tax incentives, which in Chicago are obscured by their byzantine nature. The owners of Trump Tower have been one of the beneficiaries of these tax breaks.

In this context, Chicago’s bid for Amazon’s new HQ is a continuation of a long pattern. Working-class and poor people are being driven out of their neighborhoods through a mix of disinvestment, violence caused by the system and rising costs. Meanwhile, corporations and owners who are already worth billions of dollars receive city money to bring in a wealthier, whiter work force to the city.

An Amazon HQ downtown posses a grave threat to the majority of the people who live in Chicago. Enough is enough. We will organize and mobilize to stop the racist gentrification and ethnic cleansing of Chicago.

Join us on Oct. 20 for a protest at Mayor Emanuel’s house to say: “Justice for Laquan, Not $ For Amazon HQ!”