On May 22, a rally against eviction and for land rights, called by the traditionalist faction of the Gayogo̱hó꞉nǫʼ (Cayuga) Nation, converged in Seneca Falls, NY, at the headquarters of the Cayuga Nation Police—an agency whose legitimacy is disputed. The Gayogo̱hó꞉nǫʼ were joined by members of the Haudenosaunee (Iroquois) Confederacy and non-Native supporters from organizations around the Finger Lakes region, including the Ithaca Tenants’ Union, the Democratic Socialists of America, Tompkins County Showing Up for Racial Justice, the Ithaca Pantheras and the Party for Socialism and Liberation. The 80-strong demonstration arose as a response to the issuance of eviction notices against members of the Gayogo̱hó꞉nǫʼ for back rent.

Bureau of Indian Affairs Representative Clint Halftown and his Cayuga Nation Court claim these rent payments are owed to the Cayuga Nation of New York—a legal entity he himself established in cooperation with the BIA, and which the traditional Gayogo̱hó꞉nǫʼ don’t recognize. The struggle represented by the rally can be loosely described as between Halftown’s BIA-backed faction and the faction of the Gayogo̱hó꞉nǫʼ that rejects the settler government and adheres to the customs and practices of their nation.

The demonstrators marched past the rubble left from the Native-owned buildings bulldozed in February 2020 by persons in Halftown’s pay. At the Cayuga Nation police station, the chants were led by both Native and non-Native activists and included, “No Clint, no BIA, rent-a-cops gotta go away,” “No good cops in a racist system,” and “No peace on stolen land”—chants especially cutting when directed at a police force purporting to serve in the interests of the Gayogo̱hó꞉nǫʼ.

The conflict between the Gayogo̱hó꞉nǫʼ nation and the U.S.-recognized leader Clint Halftown concerns the Native nation’s right to self-determination. Halftown’s reliance on the U.S. federal government to maintain his authority over the Gayogo̱hó꞉nǫʼ places his allegiances firmly with the oppressor nation and against the sovereignty of his Native people. His collusion with the U.S. government threatens by extension the autonomy and survival of the other Haudenosaunee Confederacy nations.

Before his ascent into power, Halftown had always adhered to Gayogo̱hó꞉nǫʼ cultural and legal norms, and had earned the trust of Heron Clanmother Bernadette Hill. According to a statement by the chiefs and clanmothers of the Gayogo̱hó꞉nǫʼ, Halftown repaid that trust by prematurely crowning himself as the leader of the nation through an appeal to the BIA—flouting the practices of his people.

For the last 250 years, the capitalist U.S. government has aimed to reduce the land held by Native peoples, to exploit their labor and their cultures, and to remove them incrementally from history and the biosphere. As a counter, the 400-year old Haudenosaunee principle of the Two-Row Wampum insists that the Native people and the Europeans are to remain separate, as two populations charting through time a parallel but independent course. According to this principle, anything but this noble distance between their cultures will court duplicity and malice from the settler side, and catastrophe and sorrow for the Native one.

According to Wanda John, who is among the Gayogo̱hó꞉nǫʼ organizers of the resistance to Halftown, “Clint is going to destroy the existence of the Gayogo̱hó꞉nǫʼ people if we continue with the BIA. He has been doing his part as an Indian agent of BIA: genocide, destroying Gayogo̱hó꞉nǫʼ.”

Halftown has paid and armed his own personal paramilitary, the Cayuga Nation Police, led by a non-Native former New York State trooper commander. He repurposed a Gayogo̱hó꞉nǫʼ community center into his own personal courthouse, presided over by a non-Native retired judge who had previously served as chief legal officer for the city of Syracuse. Halftown is replacing the traditions of the Gayogo̱hó꞉nǫʼ with those of the capitalist settler state.

In February 2020, Halftown made himself anathema by razing to the ground 11 structures owned by the Gayogo̱hó꞉nǫʼ who oppose his rule. Those structures included an ice-cream shop, a gas station and convenience store and a restaurant. As those buildings generated significant revenue for the traditionalist Native population, their leveling adds economic hardship to the destruction of property. Instead of advancing Native sovereignty, Halftown has reincorporated the nation as a new entity under a new name that reflects the dual authority of the Native nation and the BIA: the Cayuga Nation of New York. Halftown rules in his new client state as a dictator backed by the United States. As the statement of the Gayogo̱hó꞉nǫʼ chiefs and clanmothers issued in response to these demolitions explains,

“Sovereignty and the inherent right of self-determination are vested with the Haudenosaunee as a primordial political and spiritual entity that has existed long before the creation of the United States. Any internal political entity succeeding the Haudenosaunee cannot qualify for sovereignty. The current Cayuga situation is exasperated by the United States interference in granting tribal status as a subordinate entity of the BIA.”

In the current aggression against the Gayogo̱hó꞉nǫʼ, Halftown’s courthouse has issued eviction notices for Native residents who he claims owe him money. In capitalism, landlordism is a power relation that exploits the renter, and eviction is an overwhelming expression of contempt for the tenant. Eviction is an unequivocal manifestation of the indifference to human suffering that characterizes capitalist social relations. Evictions do not exist among the Gayogo̱hó꞉nǫʼ people or the Haudenosaunee Confederacy, as it is the duty of all the confederacy’s members to care for the rest. No Gayogo̱hó꞉nǫʼ would ever create a settler courthouse to mete out cruelties against her own people.

Furthermore, the six nations of the confederacy all share their lands in common, so that every citizen is welcome everywhere within its borders. Halftown is not only content to produce homeless Gayogo̱hó꞉nǫʼ families—refugees within the confederacy—but also to restrict access to his courthouse grounds to all members of the six Haudenosaunee nations. It is for these reasons that the chiefs and clanmothers of the Gayogo̱hó꞉nǫʼ nation of the Haudenosaunee Six Nations Confederacy have not only rescinded Clint Halftown’s mandate to lead, they have revoked his citizenship in the Gayogo̱hó꞉nǫʼ nation and also in the confederacy that encompasses it.

At the demonstration, Liberation News spoke with an Onöñda’gaga’ woman familiar with the matter who said Halftown is now as a white man to his people—no better than the settlers whose torments he imposes on them. According to the statement of the Gayogo̱hó꞉nǫʼ chiefs and clanmothers,

Members of the Gayogo̱hó꞉nǫʼ nation who demand their right to self-determination, asked the Ithaca Tenants’ Union and their circle of activists to assist them in blocking the evictions passed down by Halftown’s settler court. Since May 11, they have been camping out on the property of the traditional Gayogo̱hó꞉nǫʼ targeted for removal, at the request of these tenants and under their direction. The principles that housing is a human right, and that no one has to justify their existence, which ring so strangely in U.S. ears, resonate with clarity and fullness among the traditional Gayogo̱hó꞉nǫʼ.

People across the Finger Lakes must join the Gayogo̱hó꞉nǫʼ people in their struggle for national self-determination against Clint Halftown’s colonial authority, and stand against the eviction of these Native tenants from properties they collectively own. As Ellie Pfeffer told Liberation News, “Helping prevent these evictions by the BIA Representative Clint Halftown is only one part of the equation, and if we’re asked to help in other ways we will.” 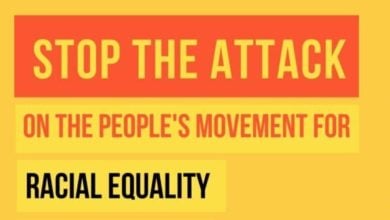 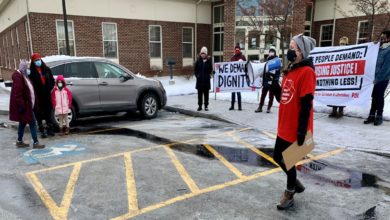 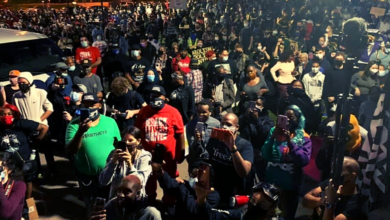