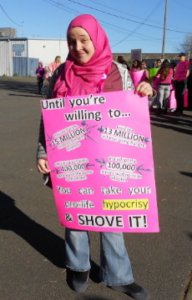 On February 11, Planned Parenthood clinics across the United States were protested by a myriad of anti-choice organizations rallying under the hashtag #ProtestPP. The goal of the protest was to push legislatures to defund Planned Parenthood.

Of the 16 sites within PPMM more than 5,277 supporters were counted while protesters were only able to draw out a collective crowd of approximately 228. Together we made our voices heard; we stand with Planned Parenthood. The people united will never be defeated.