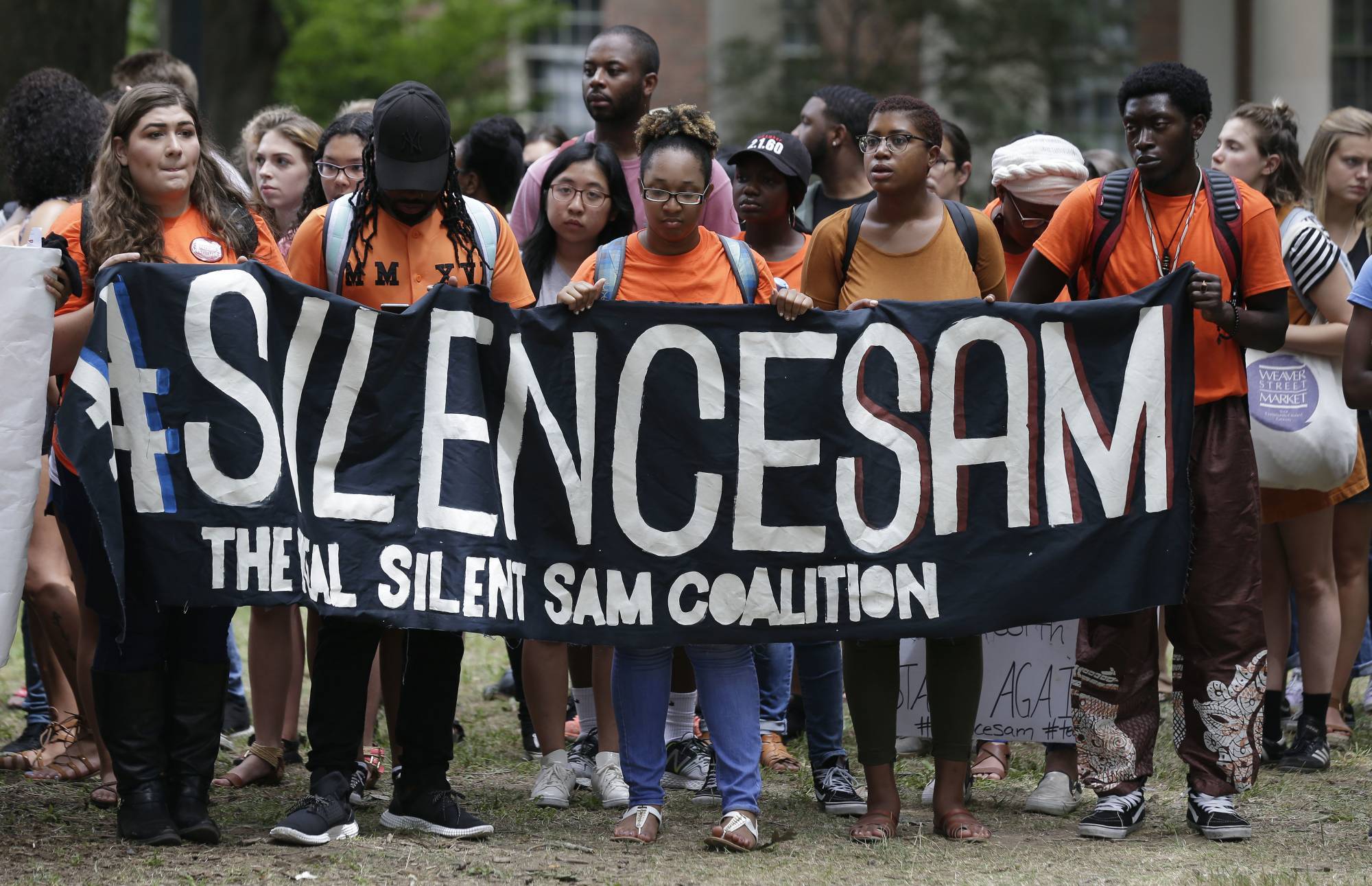 2017 has been a year of struggle at UNC Chapel Hill, most visibly in the symbolic fight over “Silent Sam,” one of the many monuments to the Confederacy and Jim Crow that litter public spaces throughout the American South.

Silent Sam has been a controversial presence on UNC campus for many years having been erected in 1913 by the Daughters of the Confederacy as clear message to Black people in the South that Reconstruction had been defeated and the state and its institutions belonged to the white elite. This statue specifically memorializes those students so beholden to white supremacy that they dropped out of school and risked their lives in defense of chattel slavery in the U.S.

While Silent Sam has been a chronic ache on the conscience of many, it became a flash point after Charlottesville, where a vile mob of white supremacists assembled under the banner “Unite the Right” in defense of a similar Confederate monument. This culminated in the beating of DeAndrea Harris and the brutal murder of Heather Heyer by one fascist.

Demands for Silent Sam’s removal only grew stronger after the people of neighboring Durham city toppled their own racist monument. A twenty-four hour sit-in followed during which students constructed a temporary settlement reminiscent of the Occupy Movement which lasted for eight days until police descended upon this peaceful protest with force.

During this time campus police officer Hector Borges, dressed in plain clothes, slipped into a protest group. He assumed a false name and false story, presenting himself as Victor, an auto mechanic who candidly shared his fictitious struggle with PTSD in order to gain trust and infiltrate this peaceful movement as a spy. This continued a month until “Victor’s” true identity was revealed when he was forced to respond to an unrelated explosion on campus.

Addressing the Faculty Council Meeting, Police Chief Jeff McCracken tried to assuage faculty concerns about police surveillance of  students with his personal promise that Borges was there only for safety purposes and undercover officers do not spy on students. This assurance was somewhat undermined when he, in the very same message, referenced information they received from Borges’s spying on students.

McCracken’s respose was essentially the same as the NSA’s in the wake of the Snowden leak; after a system of monitoring had been revealed, we were asked to trust their word that it would not be used for warrantless surveillance despite further evidence to the contrary.

McKraken’s lie is two-fold for it is also clear that campus PD is not there to protect the safety of protesters as they allege. One does not go undercover to protect people, but to build a case against them. Furthermore, while they were infiltrating a peaceful student group, they did nothing in response when someone attending a football game threatened the life of a protester. UNC Police are not there to protect students but to protect property, including Silent Sam, against students and to defend the university’s economic interests.

Indeed the university has shown reluctance to oppose racism and fascism. UNC campus gladly offered neo-Nazi Richard Spencer a platform to speak, but begrudgingly bowed to public outrage (to the lamentations of the Chancellor) and called it off. Weeks later they saw fit to host fascist-tied Sebastian Gorka who was given space and police protection to articulate his Islamophobia and apartheid apologetics.

UNC’s Board of Governors under pressure from the plutocratic NC General Assembly which hand picks its members, has avidly pursued a warped free speech agenda that defends white nationalists. A  Campus Free Speech Act has been introduced and is expected to be passed by the BOG in the next two months. This policy seeks to protect the speech of university sanctioned individuals from being interrupted by mandating that any form of speech the university deems disruptive will be met with automatic expulsion for students and termination for workers. This is understood as protecting the hate speech of white supremacists as well as scaring protesters from disrupting official university meetings which are being made increasingly opaque and undemocratic.

The state government through the BOG is currently pursuing a campaign to privatize the North Carolina public university system. This was made very clear when they went over the heads fo students, workers, and faculty in suddenly replacing the UNC President with Margaret Spellings. Spellings is the architect of the failed “No Child Left Behind” system and explicitly supports a student-as-consumer model of public education, advocates educational privatization and has already sold off the bookstores where workers now fear their jobs will be terminated once the two year grace period ends. She has also helped apply the state’s appallingly transphobic measures to NC college campuses.

In response to these threats and rampant mistreatment, workers on UNC campus are fighting back. UNC workers are building a campus-wide union within UE 150. Graduate student workers, housekeepers, groundskeepers, research technicians, dining hall workers and others are joining the union. Despite the state’s oppressive “right to work” law designed to weaken unions workers respect UE’s experience organizing under “right to work” conditions and because they realize that only collectively do we have power. The campus union has exploded in membership in the past five months and is actively pushing back against pay-to-work policies such as exorbitant student and parking fees, an end to privatization, and for grievance policies that actually protect all workers.

The UNC Workers Union stands in solidarity (and intersects with) the activists working to end racism on campus and calls for Silent Sam’s removal. A rich network of workers unions, racial justice activists, socialist parties like the Party for Socialism and Liberation, anarchists, anti-war advocates, BDS, and antifa is growing here in Chapel Hill. UNC campus has become a battleground between neo-Nazis and militant anti-fascists; police and the protesters; racism and Black liberation; capitalists and workers.