The white working class can do better than Clinton and Trump 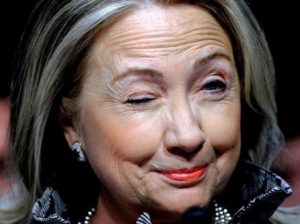 Hillary Clinton has made big news for her comment that “you could put half of Trump’s supporters into what I call the basket of deplorables.” Her audience responded with laughter: the remark was clearly meant as a joke.

The speech, delivered at the “LGBT for Hillary Gala” in New York City on Sept. 9, was clearly aimed at the close, friendly crowd—so friendly that, by the sounds of the recording, Clinton tried her hand at improvising and making jokes. Her tone was glib, bold, unapologetically shocking—the kind of tone one might expect from a low-grade shock humor standup routine. She was clearly working the crowd in her speech: many remarks are delivered with pauses to wait for the audience to laugh or applaud.

Clinton’s defenders have pointed out that the “other basket” containing the other half of Trump’s supporters is full of more generally disaffected people—people who Clinton characterized as concerned about job security and drug abuse. She characterized them as a whole as those who “the economy has let down, nobody cares about… nobody worries about what happens to their lives and their futures.”

In fact, on this score Clinton is correct: much like the broader working class, the white workers supporting Trump are indeed those who have been left out of the so-called “economic recovery,” despite politicians’ and big news outlets’ gloating. Although Clinton called for her audience to “understand and empathize with” that second category of people, neither Clinton and the Democratic Party establishment nor the Republican Party establishment can lay claim to understanding and empathizing with the working class, let alone representing their interests.

Clinton referred to this second basket in her more characteristic style—comparatively flat and uncharismatic compared to her first remark. It is especially telling that Clinton delivered the speech at a LGBT Gala, where she was attempting to rally her base to attract donations, volunteers and support. In that context, the remark about the less “deplorable” basket feels obligatory. Her flat delivery contrasts to the agitational—almost fiery—language and tone that came before it.

The “basket of deplorables,” in other words was Clinton’s primary focus. She meant to characterize Trump’s supporters as chiefly falling in this category. When considering mainstream media’s characterization of Trump supporters as primarily coming from the white working class—disaffected, primarily-rural white workers—the “basket of deplorables” should be read as a general jab at the white working class.

Of course it is an open question as to the actual, typical class character of the “average” Trump supporter; whether they are actually workers or rather downwardly mobile petty capitalists. This is not something that the media or their friends the social science researchers are particularly interested in delving into, instead preferring to rely on stereotyped and vague ways of defining the term “working class.”

The right wing for its part has responded with its characteristically insincere indignation—the sort usually reserved for those they deem in need of American- style democracy abroad, “Joe the Plumber” and other fountainheads for the right’s crocodile tears. Clinton spoke in couched terms attacking the white working class—synonymous among urban elites with backwardness, bigotry and idiocy—and the right wing accepted this caricature for truth and defended this farce against both Clinton and reality.

Given the right’s extreme hostility to basic needs of the entire working class (including white workers) such as the need for
better employment opportunities, higher wages and affordable housing, it should shock no one that the Republican Party is only opportunistically adopting a populist presentation. The Democratic Party, on the other hand, has long been synonymous with progressivism in the mainstream discourse. It appears that the party of Roosevelt, Johnson and Truman has apparently given up on maintaining the appearance of being the party for the working and oppressed. Clinton’s condescending demeanor exudes snobby elitism.

Clinton’s appeal for understanding and empathy would be meaningful were it not for her history of enthusiastic support for welfare cuts and other right-wing attacks on working and oppressed people during Bill Clinton’s administration. Moreover, when Clinton referred to the “basket of deplorables” as “racist, sexist, homophobic, xenophobic, Islamophobic,” her own record gives her no better leg to stand on than Trump. Who is Hillary Clinton to accuse anyone of Islamophobia when she organized the leveling of Libya by airstrikes and voted enthusiastically for the illegal war and sanctions in Iraq? Who is Hillary Clinton to accuse anyone of xenophobia when she deported the wave of unaccompanied child migrants from Central America? Can Hillary Clinton credibly accuse anyone of promoting policies that hurt women after supporting so many wars and coups that have left so many women dead as non-combatants? What about her long history (now conveniently forgotten) of strident opposition to same sex marriage? All of these speak to Clinton’s own bigotries, not to mention her notorious diatribe against “super predators” while First Lady.

Now, all of these programs have been covered over in the language of the New Deal and Great Society: the Democrats have positioned themselves as progressive domestically, but have few differences with the Republicans on either foreign policy or on fundamental domestic policies such as police reform.

The Republicans, on the other hand, have made little effort to cover up their agenda. Racism, sexism, xenophobia and anti-LGBTQ bigotry make up the core of its domestic program, while its foreign policy is unapologetically hawkish.

Both are parties of the ruling class, in other words. Both parties represent various shades of opinion among bankers, CEOs and other members of the capitalist class. During this election cycle, the two parties’ essential characters are especially clear, as neoconservatives and big capitalists endorse Clinton, while David Duke and other high-profile fascist elements endorse Trump.

While Trump has openly identified with the white working class’ most backward sections, Clinton’s “basket of deplorables” comment only condescended towards it. Reflecting the Democrats’ roots in the U.S. urban elite, Clinton’s arrogant and disdainful remarks were aimed as an aside to the audience, a knowing wink about the backwardness of the white working class as a whole. Put plainly, Clinton and the Democrats’ primary characterization of the white workers is that they are bigoted, unintelligent, uncouth and undeserving of political attention.

This is a gross oversimplification, and socialists, communists and progressives in general have nothing in common with the Democrats’ snooty attitude. There is nothing progressive about writing off the entire demographic by conflating it with bigotry. Rather, socialists and revolutionaries should work with the progressive sections of the white working class and build multinational organizations for multinational struggle. This has been the attitude of almost every revolutionary organization and movement in the United States’ history, from the Black Panther’s efforts to forge a Rainbow Coalition with the Young Patriots, to the Communist Party’s efforts to link the urban workers’ struggle of the northern cities with the Black sharecroppers’ struggle in the Deep South, to the powerful multinational unity that was the backbone of the Great Railroad Strike of 1877.

No revolution is possible in the United States without a strong bond of multinational unity holding all exploited and oppressed people together. This means actively criticizing efforts to characterize the white working class as a primarily “racist, sexist, homophobic, xenophobic, islamophobic” formation and rather proactively building with progressive elements of our class to fight all kinds of bigotry.