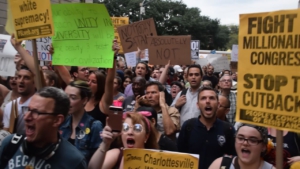 Thousands gathered near Trump Tower in midtown Manhattan on Aug. 14, aheadof President Trump’s returning home to New York that evening. The protesters stood against Trump’s bigotry and in solidarity with the victimsof the white supremacist terror attack in Charlottesville, Va.

The crowd was very diverse, with both older and younger folks, people of all nationalities and genders, and encompassing a wide range of political tendencies. The protesters were unified in their incredible energy and defiant attitude in response to Trump’s bigotry and continued attacks on immigrants, women, the LGBTQ community, and people of color.

People held signs that read “White Silence = Violence,” “From Charlottesville to the White House, Shut Down White Supremacy,” and “Make Racists Afraid Again.” Several attendees held pictures of Heather Heyer, the anti-fascist martyr who was killed in Charlottesville on Aug.12. 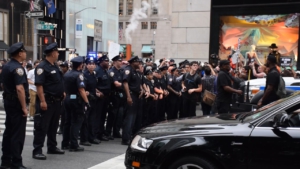 As always, the New York Police Department was in full force. They used metal barricades to section off protestors within each of the many blocks that the rally spanned. While this impeded the massive crowd’s ability to mobilize a march, demonstrators made sure their voices were heard. They chanted, “No Trump, No KKK, No Fascist USA!”, “Charlottesville, We’ve Got Your Back,” and “The People United Will Never be Defeated!”

This impressive display of solidarity and people power was met by a small group of counterprotesters. The Trump supporters harassed a young Jewish woman, calling her the “the Devil.” Another bigot grabbed a queer youth by the arm and told her she was “infected and diseased.” 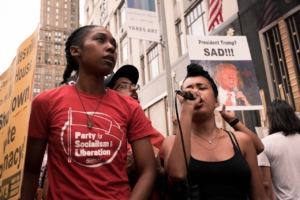 Ironically, siding with these racists and anti-Semites were members of the far right Jewish Defense League. Just a few hours earlier, the so-called defense leaguers had heckled a rally in support of Rasmea Odeh, a Palestinian community organizer who is unjustly being deported by the U.S. government. They arrived at the anti-Trump rally holding a Blues Lives Matter flag and shouting anti-immigrant slogans. They were soon outnumbered and quickly driven out.

Despite these vile and bigoted attacks, the people resisted. The right wingers were drowned out by the relentless anti-racist and anti-bigotry chants from the protesters and by several powerful speeches made by those in the crowd.

‘I want to network with like-minded people’ 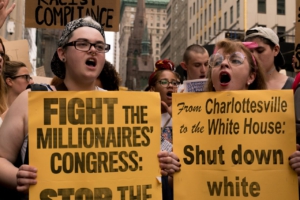 Rachel Silang, an organizer with People’s Congress of Resistance, agitated on the need to stay active in the struggles against white supremacy and fascism. She exclaimed, “We all need to be out in the streets and fighting! It is not just today. It is tomorrow and the next day and the next day!”

The crowd responded by cheering and chanting. Many signed up to receive more information about the Congress, and many more took flyers and newspapers discussing it.

Rally attendee and People’s Congress convener Celina Atoyaatl said, “I came to Trump Tower to protest the current administration and white supremacy that has existed here since the colonizers stepped on my people’s soil. As a brown Indigenous trans woman, it’s important for me to take up space within organizations to make sure that no one is speaking for me and people like me.” She said she looks forward to attending the Congress in September because, “I want to learn and network with like minded people on ways to build a better future for all marginalized and oppressed communities.” 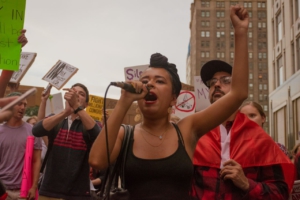 Though the thousands of protesters who showed up weren’t able to take the streets, they made their message loud and clear to Trump and the white supremacist far-right forces.The fear that these fascists wanted to strike in the resistance movement through their terror in Charlottesville has had the exact opposite effect. Instead of cowering, people have continued to hit the streets in large numbers to demand an end to white supremacy and hatred in every form.. The mood in New York on Aug. 14 set the tone for nothing short of continued resistance. The people have the power when we unite and organize No Trump! No KKK! No racist USA!

Watch video from the protest here.