Protesters gathered in the thousands in downtown Atlanta on May 29 to protest the racist murder of George Floyd by Minneapolis police officers. The march began near the CNN headquarters in Centennial Olympic park and peacefully marched a mile to the Georgia Capitol building.

A collaboration of voices embodied both the anger over racist police killings and the spirit of resistance. A young woman spoke about how she is tired of seeing Black men become hashtags. Chants demanding Justice for Ahmaud Arbery, Breonna Taylor, and George Floyd echoed through the streets as nearly 10,000 bristled under the gaze of the cops standing on the sidelines.

The march returned to the CNN headquarters and as some of the participants dissipated, screams were heard and people were seen running away from the CNN logo. Police tear gassed protesters and rocks were hurled through the CNN building and at police. Crowds chanted, “Hands up, don’t shoot” and “I can’t breathe” as the confrontation escalated. Fully armed riot cops soon descended on protesters. But even as the repression bore down, determined protesters firmly stood their ground late into the evening.

The wave of outrage follows the racist killing of George Floyd by Minneapolis officer Derek Chauvin who wedged his knee into Floyd’s neck until he suffocated. Bystanders captured Floyd’s last moments as they beseeched the police to recognize the human dignity of George Floyd.

As the fires die into the night demonstrations will likely continue for the people’s rage is not yet satisfied. Although Derek Chauvin has been arrested and charged with 2nd degree murder and manslaughter, and the other cops have also been charged, the question of whether justice will be served yet remains. 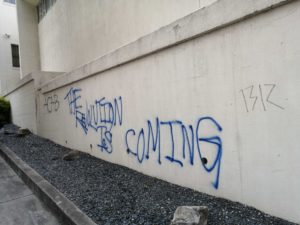 While the murder of George Floyd was the immediate catalyst for this protest and the many others taking place across the country, the underlying anger that has boiled over is much bigger than any one individual. It is the result of a long historic trajectory of police terror and white supremacist violence that Black communities have been subjected to in America.

Atlanta prides itself as being “the city too busy to hate,” encouraging rapid capitalist development to cover up the ugly racist scars still plaguing the South. But the actions today prove that the facade is fading as the racist face of the ruling class and its repressive forces reveals itself.

Racism in post-Reconstruction Atlanta echoes back as far as when the 1906 race riots scorched the streets and Black bodies were found near the Grady statue. White supremacist and journalist Henry Grady coined the term the “New South,” but a new name could not cover up the violent racist vigilante essence of the South. Georgia was second only to Mississippi in reported lynchings since the end of Reconstruction. But as the home of Dr. Martin Luther King, Jr. and many other prominent Civil Rights leaders, Atlanta also has a long history of resistance to racism and white supremacist violence. The resistance which has taken to the streets of Atlanta today inherits the rich legacy of these freedom fighters. More actions are expected to take place in Atlanta and across the country as the struggle against racism continues and activists and marginalized communities raise their voices against police terror.