“Before the land and animals and the people there was water. Water is life.”

These were the words spoken by Amy Juan of the Tohono O’odham Nation outside the Evo A. DeConcini Federal Courthouse on May 29 as crowds gathered in support of Scott Warren, 36-year-old border-aid volunteer being prosecuted for providing humanitarian aid to migrants crossing the deadly southern Arizona desert.

Warren, a volunteer with the humanitarian aid organization No More Deaths, is being prosecuted by the U.S. government in federal court on one count of criminal conspiracy to transport and harbor “illegal aliens,” and two counts of harboring. If convicted of all three felonies he could face 20 years behind bars.

Warren is based out of Ajo, a small desert town west of Tuscon, AZ and the epicenter of a humanitarian crisis. Surrounded by millions of empty acres, Ajo is located in Pima County whose Medical Examiner’s Office identified more than 3,000 bodies between 2000 and 2018, the remains of people who died crossing the desert. Many thousands more will never be found.

The idea that all human beings deserve water, food, shelter and security motivated Warren to move to Ajo six years ago and help people survive the unforgiving and treacherous Sonoran desert, which can reach 120 degrees during the day and drop significantly at night. Water and food are scarce. Along this trek, blisters can mean death because it means you get left behind.

Organizations like No More Deaths try to prevent death from happening by providing water, food and life-saving harm reduction kits that include first aid supplies, chlorine and gauze to disinfect the water left in the desert.

The staging point for NMD volunteers offering humanitarian aid in the harsh desert is a privately owned, rundown building named “The Barn.” It was here on January 14, 2018 that two Central American migrants named Kristian Perez-Villanueva and Jose Arnaldo Sacaria-Goday arrived hungry and thirsty after reportedly sharing a single Gatorade and burrito over the course of two days.

For three days, Warren and other volunteers helped Kristian and Jose recover, calling nurses and doctors and providing medicine, food and water – all of the things that U.S. immigration and border patrol authorities do not do as a matter of practice.

On January 17, 2018, No More Deaths published an incriminating video of Border Patrol agents destroying water jugs left for migrants. A joint report by La Coalicion de Derechos Humanos and No More Deaths detailed how U.S. Border Patrol agents intentionally destroyed over 3,000 gallons of water left for migrants, leading to an unknown number of deaths, and causing a national uproar.

Within hours of the release of the video titled Footage of Border Patrol vandalism of humanitarian aid, 2010–2017 , two Border Patrol agents began surveilling The Barn, arrested Warren and detained Kristian and Jose. The political and retaliatory character of the arrest is indisputable.

When No More Deaths, a ministry of the Unitarian Universalist Church of Tuscon, expanded its operations into Ajo several years ago, they became the target of U.S. immigration and border patrol authorities for exposing the savage immigration policy, developed by successive Democratic and Republican administrations, of controlling the flow of migrants by driving them through the desert.

Since the adoption of the Clinton-era border patrol strategy called “prevention through deterrence” in late 1994, the Border Patrol has sought to increase the number of agents, build border walls and barriers and use technology to deter the flow of migrants at major crossing points, particularly in populated regions. The result, entirely intentional, is to force migrants across the most rugged, distant, and dangerous desert routes leading to a massive increase in deaths. This policy of using the desert as a weapon has been complimented by a crackdown on aid organizations.

The Sonoran Desert stands today as one of the largest cemeteries on the planet as a consequence of racist U.S. policies established to manage the waves of migration set in motion by other racist U.S. policies, like the criminal looting of Mexico known as NAFTA.

Driving across Tucson on the opening day of Warren’s trial, one could see many signs hung in support of No More Deaths that read, “Humanitarian Aid is Never a Crime.” In southern Arizona, the support for No More Deaths and their mission is strong.

The outcome of this case will be critical to the future of humanitarian aid organizations and the individual rights of those who choose to aid migrants. The outrageous prosecution of Warren and the possibile 20-year sentence if convicted is designed to have a chilling effect on communities that have aided migrants for generations. Many are asking, “What will happen to the rest of us?”

Additionally, U.S. government is hoping that a conviction of Warren can help redefine what is legally considered “harboring” migrants. Warren never disputed showing up to The Barn or assisting migrants with basic necessities as they passed through. No More Deaths works within the legal bounds of humanitarian and U.S. law to provide the assistance. For many years humanitarian aid groups have provided such necessities, including medical treatment.

The application of felony smuggling laws to humanitarian aid workers who provide medicine, food, water and orientation to migrants has widespread implications for all humanitarian, immigrant rights and other organizations around the country who work with undocumented communities.

On May 29, people poured into the Tucson federal courthouse to demand that all charges be dropped. Here is what happened on the first day of the trial:

All progressive and revolutionary people should stand in solidarity with Scott Warren, No More Deaths and all people aiding undocumented people across the U.S. We demand that all charges be dropped immediately! 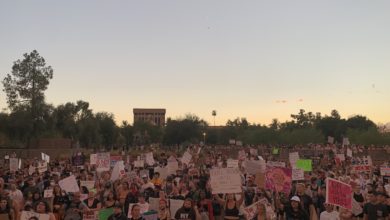